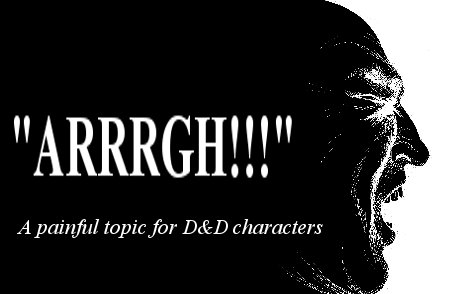 Re-reading the old Dragon magazines on ENWorld (in this thread) we’ve made it to issue 118 – and one of the articles in that issue was “ARRRGH!!!” – an article adding rules for pain and wounds to AD&D1e. Because of this article, my copy of this issue is pretty abused. We used the rules in all our AD&D1e games from then until I dropped the game completely when 3e came out (it was never my favourite game – but I had players and groups who just couldn’t be convinced to play B/X with me).

This article is a re-write and simplification of the tables-heavy rules in that article to work with all the old editions of D&D – primarily focused on my own obsession of Moldvay Basic but also handling AD&D1e and 2e (hopefully – I have never played 2e myself) and OD&D.

Author’s Note: I am personally a fan of the “death spiral” effect in RPGs, although I fully understand that it is in no way representative of reality. Yet somehow it adds verisimilitude to the game for many players as they feel this is how it should work in the real world, whether or not they have evidence that it really is that way.
.

.
At the heart of this system is the belief that a wound of sufficient severety should cause pain that in turn affects the character’s performance.

Every time a character takes damage in excess of his threshold of pain, he suffers a wound. Record each wound and the amount of damage of the wound on the record sheet. According to the number of wounds that a character has sustained, certain penalties apply to the character’s performance.

These penalties remain in efffect as long as the wounds remain unhealed. At 5+ wounds, the character has lost the ability to stand without aid and is crawling at 1/6 his movement rate.

Wounds are temporary. Whenever healing (natural or magical) occurs, spread the healing over the character’s wounds (reducing the hit points of damage of each wound), with remaining healing going to the older wounds if it doesn’t divide evenly. When a wound’s damage total is reduced below the character’s threshold of pain, then the wound is removed. Optionally healing spells and laying on of hands abilities can target specific wounds, in which case the healing applies to that one wound first, and any remaining healing (if any) is spread around the remaining wounds as above.

4 thoughts on “ARRRGH!!! – Pain and Wound Rules for Dungeons and Dragons”