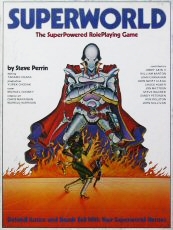 (with apologies to Jared Sorensen, who I don’t know in the least but am enjoying “using” as the sample character in this game)

Once upon a time, every publisher in the industry had to publish a superhero game. With the huge selection out there, from Marvel & DC franchises, to the classic point-buy Champions game and the fully random FGU Villains & Vigilantes, Chaosium joined intothe fray with their BRP-based “Superworld” RPG.

Honestly, the main thing that sets Superworld apart from the competition is the BRP (Basic RolePlay) system – the same baseline system as used for Call of Cthulhu and the other successful Chaosium games. And like most supers RPGs in the post-Champions environment, character creation can be a bit time consuming.

For this character creation, I want to make a classic Iron Man type superhero – someone who is actually reluctant to be a hero, who would rather be doing his own thing, but who’s strong morals prevent him from walking away completely. That said, I’m not interested ina power-armour type hero, I’d like someone with a lot of ranged grappling type moves – like spidey’s web-throwing, but a projected attack that is actually part of the hero, tendrils of muscle and sinew that grab and throw around opponents.

To start off character creation, unlike most games, we start off with a secret identity. I figure a good secret identity for a superhero would be a game designer. Someone brilliant and weird, but basically a playboy of the RPG scene. I think I’ll name him “Jared Sorensen”. The closest occupation I find on the list in the game is “Playboy”. Sounds good to me! Playboys get a nice annual income of 2d100x$10,000 – Jared is loaded! Even with lousy rolls that’s 390k per year – enough money to spend it on printing weird games where players play ghostbusters driving around in fast cars in the American subconscious while supposedly writing a cutting edge transhumanist game while ACTUALLY saving the world from evil mutants.

Next up we need an origin for his powers. Which really means I need to figure out what the whole tendrils power is all about. Rhizomes? Maybe too fungal… bubble gum? Maybe even too weird for a Sorensen superpower. Just plain spite. He gets angry and these tendrils shoot out. So for an origin, let’s say he got really angry while at a GenCon VIP event, not realizing at the time that the peanut butter and jam sandwiches being served had been laced with TCRJ chemicals from an accidental spill just down the street. His first manifestation of the powers that night killed many of the VIGs and left him nearly naked and even more weirded out than usual.

Stats are determined randomly using 2d6+6, rolled in order. What we get is a clever, good looking and quite tough young man who’s only “low” stat is Power, which is still human average. The character’s skills and superpowers are then purchased using a point-buy system with the number of points being determined by the total of your stats – so someone with very lucky dice gets not just awesome stats, but more skills and powers. At’s at times like this that I wonder why no one ever considered the opposite approach back then – higher stats? less points! Anyways, Jared, now known as Tendriculous Rex, gets 101 hero points, plus 15 more to spend on skills from the Playboy background (prior to becoming a hero).

Since Knowledge is a playboy skill and includes things like trivia, I’m going to try to max it out for Jared – how else to simulate his strange collection of game designs? With his high Int, it takes 3 hero points to max that out at 96%. Obviously he must be fluent in Russian too, and have a passing knowledge of Portuguese and a smattering of German. (6 more points, only 7 left). He can drive a car, and has some amount of skill piloting passenger jets after having to bring a 747 down for a landing while the pilot was suffering from food poisoning back in 1989 (5 more points spent). With his last two points, he improves his climbing and swimming skills.

So now to the heart of the matter – building Tendriculous’ superpowers. From his 101 points, I want to save up 10-20 to spend on skills, the remainder I get to splurgeon these crazy tendrils of his. It seems the simplest way to handle these “tendrils of Jared” will be the stretching power, but i have to keep it under level 36 so he can’t actually stretch his whole body through keyholes and stuff. Instead, to make it an attack power, I can pick up six levels of Energy Projection (Kinetic) with the special ability that it can be used to parry (by wrapping his tendrils around targets and weapons). This costs 18 Hero Points, and increasing the potential damage with Impaling (so the tendrils cut right through soft targets) increases it a further 3 points. Adding on 10 levels of stretching so he has the ability to grapple and strike without the energy project up to 10m costs another 30 points (51 total).

To power up his awesome tendrils, Jared picks up 15 levels of super strength (+45 Strength) and 9 levels of super Constitution (+9 Constitution). Finally, so he can use his tendril attacks a bit more often, 5 levels of Energy Supply will increase his energy by 50 points, since his tendril attack costs him 21 Energy. With his remaining 21 points, he picks up some skills – focusing on acrobatics, persuade, invent, and boosting his energy projection hit rolls.

And now we have the superhero Tendriculous Rex, with his awesome destructive tendrils of doom that he uses to protect humanity while not living his dream life as a playboy game designer.