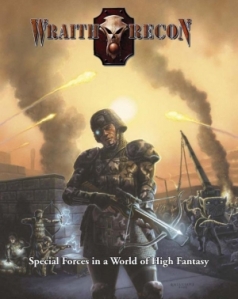 You got your military RPG in my Dungeons and Dragons!

What sets the Wraith Recon team members apart is the Spellcaster Command Omniciex-shard Lens System, also known as the SpellCom – basically a one-eye heads up display unit that grants a bonus on Perception checks, darkvision, low-light vision and the ability to see magic spells, effects, and magic items for one round per encounter. It also allows whispered communications between all SpellCom equipped personnel within 500 ft (as well as the team’s operations arcanist back at HQ), the ability to see through any other SpellCom within 50 spaces, and zoom capability which reduces long-range attack penalties.

Wraith Recon team members can purchase personal equipment, but the assumption is that they will operate using their assigned (high quality) hardware, like any military unit. Thus the book provides a list of standard equipment as well as how it improves as the characters gain levels, and what special equipment is issued based on character class.

When it comes down to it, one of the few complaints I have about running a Linux box is the inability to run the D&D4e Character Builder. So I’m off to make a character by hand. The first thing I want in a special operations guy is the ability to hit hard, and the ability to remain hidden until it is time to hit hard. Sounds like a job for the D&D4e Rogue – a sneaky striker class.

Since I’m going for that “elite special forces” feel, there  is no more “leet” race in all of D&D than elves. Well, 4e has Eladrin also, but the fanfavourites over the various editions for sheer fanfic Mary Sue effect has been the elf (well, outside of 3e, where elves were hurt badly by their Con reduction).

Jorun Mel’var, our elven rogue, gets bonuses to Dexterity & Wisdom (good stuff for a commando), a bonus to Perception, and also helps the rest of his team with a bonus to their perception skill. For his ability scores, I’m using the 4e standard array: 16, 14, 13, 12, 11, 10. I assign them to Dex, Str, Con, Wis, Cha and Int in order. For his alignment, I’m going with Unaligned. He’s not in this for the morality, he’s not in it for freedom, or saving lives. He’s in it because it’s a job that he’s good at.

For his tactics, since he doesn’t have a good Charisma but does have a good Strength, he goes for Brutal Scoundrel – increasing his sneak attack damage. For his at-will abilities, I decide that he’s going to focus on Dexterity based abilities (clearly). Unfortunately, the Rogue at-wills that involve ranged weapons are specific to crossbows and slings, not the bows that he has racial preference for. So I grab Deft Strike that lets him move 2 squares before attacking (increasing his mobility even more than his already decent racial advantage to movement), and Riposte Strike, so he can set up his targets to take an extra attack from him in melee. For his Encounter power, I go for damage output that also meshes with his earlier choice of being a Brutal Scoundrel – Torturous Strike. Combined with a sneak attack, this will lay down some serious pain. Finally his Daily is going to be Trick Strike, so in addition to his own high mobility, he helps the team out by moving key targets around to better positions for his team mates to attack (as well as maximizing his own damage output).

As a level 1 character, Jorun gets a single feat. He grabs Quick Draw, giving him an Initiative bonus which will improve his odds of having Combat Advantage over targets, and the ability to draw weapons as part of an attack action with those weapons.

Now we get to the fun stuff. Military gear for a Wraith. The Wraith Recon teams are quite well equipped. Beyond the SpellCom, they also get cash, magic armor & weaponry, Elven cloak & boots, and more gear. He also gets to choose to requisition either another magic weapon or a pair of burglar’s gloves and can switch these between missions. We’ll go with the gloves for now.

And with that, we have Jorun Mel’var, elven recruit to Wraith Recon Four.