Captain Sternn puts the hardest spin on the Mutant Future version of Heavy Metal. What we learn in this sequence is that there is a Federation in space, and Captain Lincoln F. Sternn has broken most of their laws, if not all of them (including one moving violation) – seemingly all while on duty as a Federation officer.

This is also the first time we see the direct mutative capability of the Loc-Nar (as opposed to it dissolving people into goo or even down to nothing).

The next sequence is B-17 which I am skipping as it is obviously historical and not future oriented.

After B-17 we come to So Beautiful and So Dangerous which, like Sternn, is set in a much larger space setting populated with strange aliens, huge space ships and lots of drugs as well as interfacing with a modern Earth.

So, how do we make this work with the Mutant Future Earth described in Harry Canyon and Den?

So Beautiful and So Dangerous shows humanity as the Mutant Wars are just starting. Constituents are turning green, they’re growing arms in their backs, and there is something or someone up there in space that is doing it. It also shows Earth at the point of first contact with the greater galactic Federation. It seems that Earth is just another human planet among many, and the other human worlds are much better off than Earth when it comes to galactic economics and a planetary standard of living.

To make matters worse, galactic researchers show that Earth is in a radioactive area of space, and the very planet is becoming mutagenic to all forms of life on the planet with only a few bloodlines of humans expected to continue to breed true in such an environment. 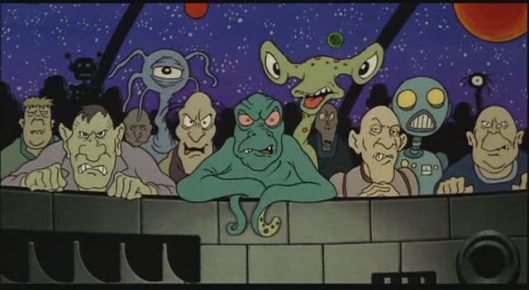 The shock of contact with a greater human civilization as well as the death sentence for the planet sends much of the world into a panic. Reacting to the immediate departure of large parts of the population (especially from third world countries who are promised far better lifestyles offworld), the mutant wars begin. As if not content to know the planet was going to hell, and no longer worried about destroying the whole human race and culture, nations begin using their stockpiles of nuclear and biological weapons.

Huge stretches of the world are reduced to wastelands populated by mutants and survivors, while some major cities like New York remain with their collective heads buried in the sand, pretending that the world goes on as it always has.

In the wastelands we find not just the ruins of our own technologies, but the occasional artifact of our contact with the stars. There are occasional items and weapons that are obviously from a technology beyond the grasp of the 21st Century human.

If you want to run a game that stretches off the confines of the post-mutant wars Earth, the aliens as shown in the Sternn sequence can be handled easily as mutant humanoids with a 1d3-2 physical mutations and the Aberrant Form mutation. Throw in a few androids and you have the majority of the universe handled for you – and don’t forget that actual humans are the dominant species overall, as they use the Pure Strain Human stats, making them significantly more powerful stat-wise than the average sentient alien. That’s what we get for letting in the low-life from other planets.

And of course, Dr Anrak is just a base-model Synthetic with a boosted Intellect and Charisma (to best calm humans in the face of impending contact from the galactic Federation). And the Robot with John Candy’s voice has a high Charisma also, and possibly enhanced… robotic assistance.