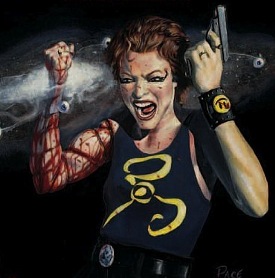 Necromancers. Is there anything they can’t do?

The ultimate “evil” wizards or clerics. Bad-guys for every story type. Anyone who messes with the dead is obviously a bit creepy, right?

While perusing the wonders of Wikipedia today, I came across a modern location that every necromancer would love to set up shop in. Seriously, there must be a necromantic waiting list for this place. So I thought about it a bit and came up with 5 sites where I would love to set up a dark and creepy necromancer in the modern world. Those excellent scenes for the major conflict in your d20 urban arcana game, your Feng Shui madness, or dealing with the nephandi in Mage or a seriously out of balance yin-powered Kuei-Jin in Vampire.

Because even Unknown Armies necromancers need awesome bone-studded necropoli as much as their medieval fantasy kin.

And here are my 5 picks for hotspots for the modern necromancer:

Just looking at the photos of this mausoleum and accompanying graveyard in Kyoto, Japan makes me want to pull out “Kindred of the East” and write up some scary Yin-focused necromantic Kuei-Jin (eastern vampire in the Vampire: the Masquerade setting). Just the “Ancestor’s as far as the eye can see” photo that shows the graveyard and monuments all the way down the hillside into Kyoto is monumental on it’s own without the wonders of the Mausoleum itself. Definitely a great place to host the final conflict in a Feng Shui session.

This one calls out for a Call of Cthulhu style investigation game. In addition to being the only prehistoric underground temple in the world, it was converted into a mausoleum late in it’s history (but still in prehistoric times). Deep on the third level of this mausoleum there was a burial chamber that was hard to get into and that supposedly lead to a much larger and stranger area that may have been inhabited. The chamber has since collapsed (with a scool tour group within it) but makes for an excellent “deeper secret” area within the already remarkable structure where the investigators can uncover the machinations of a foul necromancer or even whatever strange white-haired humanoids live in the caves.

The Necropolis of the Terracotta Army

This one has been done before, even in movies, but it is truly immense. The first Qin Emperor was buried in a true necropolis, complete with armies of figures or warriors, chariots, horses, officials, acrobats, strongmen, and musicians. Sure, the last of the Mummy movies used the terracotta army schtick already, but go at it from another angle. I could totally see a scientific necromancer working here as an archaeologist slowly helping with the reconstruction of the army, but also syphoning off as much necromantic energy from the site as he could every night. Even if he has no power whatsoever over the statues, just having a scene play out in this heavily guarded world heritage site would have the players freaking out, expecting the statues to turn on them at any moment.

If the city of New York buries someone, it is on Hart Island. This means a lot of people have been buried here over the years. Almost the entire island is the cemetery where roughly 2,000 people are buried every year, a third of them infants. The island is home to a small collection of abandoned poor houses that are being torn down to make room for more mass graves, as well as an abandoned women’s insane asylum , a drug rehab centre, and nuclear missile silos. Does this not scream for a villain to set up shop here amongst the abandoned and unidentified dead children of New York, probably living in the run down asylum?

This amazing Roman Catholic Chapel in the Czech Republic is head and shoulders above the competition. Seriously – not only does it have a massive coat of arms made of bones, and four huge bell-shaped piles of bones, but an awesome human bone chandelier which contains at least one of every bone in the human body. The place is gorgeous and creepy all rolled into one package and there are probably necromancers lining up right now to take over tennancy. This is every necromancer’s dream home.

3 thoughts on “Top 5 Lairs for a Modern Necromancer”