During last week’s rush of deadEarth insanity, I picked up some new pens and made a few maps on the three different mediums I typically use (4 quad graph paper, a cahier of 8 quad graph paper, and plain white paper) to test them out. One of the “test maps” for the new pens was, surprisingly enough, a post-apocalyptic encounter inspired by all the deadEarth reading I did.

This is originally meant as an encounter for “recent post-apocalypse” style games (where the apocalypse was in recent memory) like deadEarth or Aftermath!, but it can be adopted quite easily to the Gamma World set like Mutant Future – which is how I’ll be presenting it below.

Wheelz! is meant as a short encounter that may take a full session of game play, but will likely only take up a few hours. The entire encounter takes place on the edge of a decayed parking lot on the outskirts of a bombed out city. At the back of the parking lot is an underground structure where someone had set up a garage in the months immediately after the apocalypse.

That was years ago, and the garage was abandoned and lost until recently. This encounter may just be a nuisance encounter for some parties, but for the right group with the smarts and the right skills (and a bit of protective equipment) it can become the chance of a lifetime – to drive off in their very own truck!

The opposition in this encounter hasn’t been statted out because it should be chosen to be of a power level appropriate to your game (and to the game proper – they will be human mutants in a game of deadEarth, irregulars in a game of Aftermath!, and who knows what kind of odd mutant critter in Gamma World or Mutant Future). All that matters is they are of roughly human intelligence and social enough to work as a scavenging team. 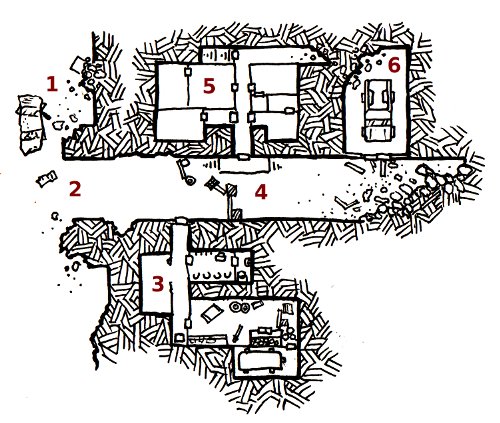 Area 1 – The Parking Lot – The ground here is flat and grasses and weeds are in irregular clumps instead of covering everything. There are a few wrecked vehicles here, rusted and burned out and stripped. The area is patrolled by a small patrol of scavengers along with one of their animals (like a big mutant dog).

Area 2 – Entrance – This used to be the entrance to an underground garage or maybe a subway system. All that you can tell from out here is that someone has set up shop inside and there are barricades of old scrap metal and wood about 30 feet from the entrance.

Area 3 – The Old Garage – After the war, this old garage was renovated and put back into use by a survivor. The door to this area is barred shut from the outside and someone has painted a skull and crossbones on the window. As soon as the door is opened, a strong chemical smell wafts out that makes eyes water. Those who know such things can identify it as fuel. There is an old lounge and bathroom on the east side of the entrance, and a burned out room on the west side. The drink machine at the end of the hallway still cheerfully advertises the hottest in pre-war cold drinks, but is non-functional and empty. The big room at the end is a garage workshop with a pile of wreckage  and tools at the far end where shelves full of tool boxes collapsed onto the paint cabinet. Behind that wreckage is another door leading to the final room which contains a massive fuel storage tank that is slowly leaking. This whole area(not just this room, but all of Area 3) is dangerous as the poisonous fuel vapours have filled the place, and protective gear will be needed to get at the fuel without suffering in the process.

Area 4 – Encampment – Behind the barricades are the scavengers and hangers on, a few armed with decent weapons and on guard duty, the rest mostly “allowed” to follow them around as long as they don’t get in the way and feed themselves and make themselves useful when needed. There are also another two or three animals in here, leashed and fed. The back of this area collapsed during the war. There is a raised platform on the north wall with a door to area 5.

Area 5 – Base – This is the scavengers’ base of operations for the time being. They are currently scavenging the area looking for fuel for the truck, but in the meantime are also taking advantage of the protected area. Even if they do find fuel (or figure out that they already have a lot of it – they have mistaken the vehicle for an electric model and are looking for batteries / atomic power cells / something similar right now), they may end up staying here and using the truck for raids. A nice base like this is hard to let go of. There are a total of about six scavengers who live in the various rooms in here, including the well-armed leader. The passage at the north end of the area leads to a set of stairs down (which can lead into a further area of your own creation, or just a small basement room where they keep prisoners tied up) and to a collapsed passage that lead to area 6. They aren’t exploring area 3 because of the poisonous fuel fumes – but if they intend on leaving the last thing they’ll do is send the hangers-on into area 3 on a scavenging mission, not caring if some of them die or become horribly ill.

Area 6 – The Truck – With the passage from area 5 collapsed, the only way into this area is through the big double doors that lead to area 4, and that are currently jammed shut with lots of old scrap metal. Once cleared, the doors can be opened to find a perfectly maintained (although dusty) pre-war truck with all the accessories… all it needs is a little fuel.