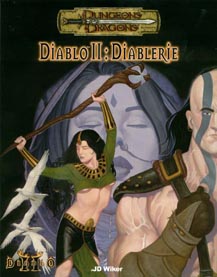 Sometime before 3e was released, Wizards got the license for the Diablo RPGs. The Diablo II supplement for 3rd edition was written before either 3rd edition OR Diablo II was released, so it sometimes seems to be a bizarrely distorted vision of either / both. And yet, I’m a Diablo II junky. And just to prove it, here comes a pair of Diablo II characters – one starting character “by the book” and one advanced character also using some of the tasty bits adopted from other d20 products (like race…)

Since I don’t know what I want to make right now, I’ll let the dice do the talking by using the “Organic” character creation method. 4d6-L for each stat in order, then swap two stats and re-roll one stat (the swap and re-roll are optional).  I’m a sucker for random chargen I tell you. To hell with point buy – gimme dice and tables!

Looking at the various classes (Amazon, Barbarian, Necromancer, Paladin and Sorceress) this screams out Sorceress… although a few good moves of the stats would make a decent Paladin (swap the Con & Int and reroll Strength). On that thought I’ll leave the scores where they are and reroll Strength. And my sorceress was never intended to be strong, I guess, with a reroll of 11.

So Vitorra El-Valtera (a homage to mr Valtera, founder of Valar Productions and publisher of the book of elf pr0n) comes on the scene. Interestingly enough, she gets a d6 for hit points (like a Pathfinder sorcerer would get, as opposed to the venerable d4 for magic users throughout the history of D&D). She gets 20 skill points at level 1 and a very small list of available skills. She drops points into Spellcraft, Knowledge (Arcana), and Concentration, and also picks up Spot and Listen as a cross-class skills (using 4 skill points each to get 2 ranks). At level 1 she gets the Mental Warmth ability – allowing her to spend a full-round action to make an Intelligence check to regain a used spell for the day. She can attempt this once per day per 2 levels… And according to the rules I should be rounding down, so she should be able to use this ability 0 times per day. How… nice. I’ll take that as an editing mistake and let her use it once per day. She also suffers from Arcane Spell Failure as most arcane spellcasters do (even bards in light armour back in the 3.0 days).

As a Charisma-based spellcaster, she gains an additional level 1 spell per day for her high Charisma, in addition to the 2 per day that she starts with. She begins play with knowledge of two spells from the level 1 Sorceress spell list, and won’t learn any new ones until level 3. There are only 3 level one spells to choose from anyways, so she has to decide if she’s willing to skip out on either Fire Bolt, Charged Bolt or Ice Bolt. Fire bolt does 1d6 dmg / level (Ref save for half), charged bolt creates 3 bolts doing 1d4 dmg / level (but which target random opponents  in range) with a Ref save for half damage, and Ice bolt does 1d4 dmg / level (again with a reflex save for half) and creatures that fail the save also suffer -2 to AC, melee attacks and damage and reflex saves for 1 minute. So Ice Bolt and Charged Bolt it is.

As an interesting note, there are several armor items in this version of the game that do not have a spell failure chance. Most only provide a +1 AC (Cape, Cloak, Rags, Robes), but some are more interesting like the Crown with a +3 AC (as with the Bone Helm). Of course, the good ones are way out of Miss Vitorra’s price range as a starting character, but I definitely see her running around buck naked except for a +3 AC crown by the time she’s level 2, laughing at the third edition rogues and their Studded Leather armor. Of course, Diablo characters start with less money than D&D characters, since all they buy is armour and weapons. So her 2d4x10 gp comes out to 60 gp. Enough for a Cape (0% spell failure, +1 AC) or even a mask (also +1 AC, and a 2% spell failure rate, but it looks WAY cooler), and a few minor weapons. If she had more pocket change, a 2d6 damage great maul would make for an excellent visual effect for our skinny masked sorceress, but for now she’s stuck with balanced knives for throwing and a spiked club for less subtle work.