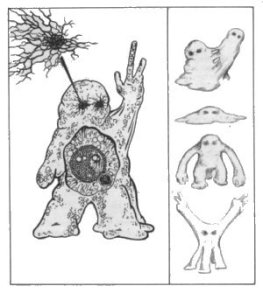 When I think of sci fi games, my heart always goes out to poor maligned Star Frontiers. While I prefer many of the incarnations of Traveller, Star Frontiers manages to bring back fond memories of Dralasites in fine suits and Rocky the Flying Yazirian Insurance Salesman. Really.

I’ve already made a starting character for Star Frontiers, so now I’ll make a higher-level character. A character should earn roughly 5 XP per game session according to the Alpha Dawn Expanded Game Rules. So a character that’s been out there for 20 game sessions (6 months of regular play) will have roughly 100 XP to spend, and some much sweeter hardware to go with that.

With that in mind, I pulled out the character sheet for Jiminy Bondo, my Dralasite secret agent. He’s spent 113 XP so far. So I think I’ll just go through his creation and advancement here.

Jiminy Bondo is a suave, smooth-operating roulette-addicted blob of protoplasm. His initial stats were pretty average for a Dralasite, initially starting as (including his +5 STR/STA and -5 DEX/RS for being a Dralasite):

Realizing that he wasn’t cut out for the running and gunning business with stats like those, he focused on his high personality. Starting characters get to swap up to 10 points between stats, but they have to stay in the same stat set. It is particularly showing that I know my way around the game that I finished off with these stats:

(As a Dralasite, I round my Dexterity/10 up for my number of pseudopods, and all characters get an Initiative Modifier of their RS/10 also rounded up.)

As a Dralasite, Bondo also starts with the racial ability of lie detection at 5%.

Then it’s time for skills. Bondo had to decide on two skills, and one would have to be in his Primary Skill Area – skills from outside his PSA would cost double XP in the future. Not being set up for fighting (Dex of 39 means he starts with a 20% chance to hit), he grabbed BioSocial as his PSA and took the Psycho-Social Skill as his first skill (giving him skills at empathy, persuasion, communication, hypnosis and psycho-pathology- all good for a spy). He also grabbed the Environmental skill because it gives him tracking, stealth and concealment as well as a few other subskills meant for wilderness survival.

Then it was time to start spending those delicious XP to make him more effective. Realizing that he was not too hot with a weapon, he picked up Projectile Weapons skill immediately (for 6 XP for level 1) to give him +10% to hit, which he used to combine with a machine pistol (he called it his Walther MPPK-10) to get an additional +20 to hit for firing a burst. These days however, he’s increased the skill to level 3 (for an additional 30 XP) and uses the old Walther as a backup to his sleek new Silgam Black Sliver Pistol (a silenced flechette pistol that he loads with sleep toxin darts).

He also bought up his Psycho-Social and Environmental skills to level 3 (for 25 XP each). He also picked up a level of Melee Weapons skill along the way (for 6 XP) for the variety of situations where a stunstick or shock glove comes in handy.

The rest of his XP went into his social stats, increasing Personality to 75 and Leadership to 63.

He’s a lot more capable than he was when the campaign started, and this is also represented by his hardware. After all, the going rate for his skills in a day-to-day living as a non-adventurer is 100 Cr a day, and in the field he sees pay rates in the Cr150 to Cr350 range (including transit time, thank you VERY much).

His current kit includes the “usual” mandatory hardware for a smooth operating Dralasite spy – a civilian skeinsuit to reduce damage from projectile weapons (while looking like a Dralasian Tuxedo), an Albedo screen and Gauss screen combo unit from the religious planet of Toulex for defense against lasers and stunners (although it can only be set to one mode at a time, it’s far less cumbersome than carrying and wearing two belt screens, and it looks like a fancy bracer). The Silgam Black Sliver Pistol is a fancy needler pistol that gives him a +5 bonus on his attack rolls with it, but remains painfully useless if the opponent is wearing a skeinsuit or inertia screen. So for backup he still carries his original sidearm, a Walther MPPK10 machine pistol with an optional silencer. For “hot” operations he also carries a bandoleer of Doze Grenades, and has been considering spending 6 XP on the thrown weapons skill to make them 50% more accurate…