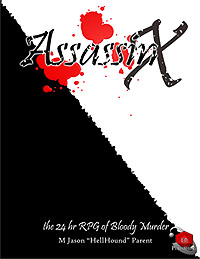 AssassinX - The RPG of Bloody Murder

Sometime back in March of last year I posted a sample starting character for AssassinX, the RPG of bloody murder from ENPublishing. You can download a copy for yourself at 1km1kt.

The other day I found myself running a game of AssassinX with the author as one of the players. To throw a screw into the game, I encumbered the group with an insane hitman in their midst. Of course, to counter this, they proved that they can out-insane anything I throw into the game.

Leading up to this game, the players had been involved in a few seriously botched jobs the last two times we pulled out the game. In the end they were ditched from their agency and have become mercenary hitmen working out of Poland.

And their latest employer included two guys for the job that they had never worked with before… one being Justin “Justice” McPhee.

I built up Justice as a PC so he would be on par with the players, although a bit better.

First off was point-buy for his ability scores (instead of the standard 4d4 for each stat). 60 points spread between Cool, Hunger, Beef, Finesse, Fellowship and Eyes. Since Justice is supposed to be unhinged and out of control, I went with a very high Hunger (15) and low Cool (5). I pictured him as being pretty slightly light in build, good looking and usually personable until he snaps, so I put the other 40 points as Beef 8, Finesse 11, Fellowship 13, Eyes 8.

This gives him secondary attributes of:

Experience is handled differently in AssassinX than in most games I’ve played, except maybe the Chaosium house system. You get check marks for successful ability checks, and at the end of the job you divide the ones in secondary abilities back into the primary abilities they are derived from, then you roll 2d10 plus the number of check marks you have for each ability, trying to roll higher than the current ability level +4. If you succeed, the ability goes up by one and you recalculate your secondary abilities. If you fail, you still lose all your check marks.

So, most of the members of the team have been involved in 3-5 major jobs in their histories. Using that as a baseline, I give Justice the equivalent of 3 major jobs and 2 minor jobs worth of experience. The major jobs I divide up 25 check marks each into his abilities, and for the minor jobs I give him 15 check marks.

I’ll detail the first job’s worth here – I divide the 25 check marks between the 6 attributes, giving at least one to each stat. I put a lot of them into hunger, and most of the rest into eyes and finesse.

With those numbers I pull out a pair of d10’s and roll for each stat. Hunger is almost a freebie, as he has to roll a 19 on 2d10+10. I get boosts in Hunger and Finesse. I do similar distributions for his other jobs (although I give him a couple with a lot of interpersonal work to do as a middle-man, so a fair amount of points into fellowship) and out of the 5 jobs he ends up with +2 Hunger, +1 Cool, +1 Beef, +1 Finesse, +2 Fellowship and +1 Eyes.

Finally, since he has successfully completed two major jobs, he has two chances to acquire signature equipment with successful Ease checks using his new Ease of 14. He makes both checks and picks up a heavy duty gold grille for his teeth (+1 Freak when appropriate) and a modified Ingram Mac 11 with all the fixings (+1 Rip when appropriate).