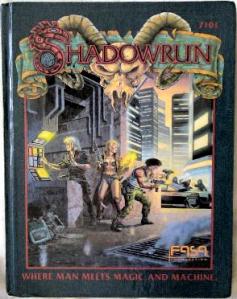 Shadowrun came out during the rush of CyberPunk RPGs like CyberSpace, CyberPunk, GURPS CyberPunk, and CyberHero (lots and lots of cyber in there)… The twist with this one is of course that in the near future the issue isn’t just the collision between man and machine, but the merger between man, magic, and machine. It ends up feeling like a mercenary RPG (Merc 2000 for instance) mixed with CyberPunk and Dungeons & Dragons.

The game has been through several incarnations over the years, but the one I have handy right now is the 1st edition from FASA (a nice hardcover with a mix of b&w and colour artwork).

Shadowrun was the first game where I ran into the “priority” system for making a character. You get 5 categories to place your priorities into, and priorities of 0 through 4. So if you want high stats, you get lower priorities to other segments.

What I’m going to make is an Orc Mafia Don. Not necessarily a very effective one since he’s still a beginning character, but let’s see how far we can take it.

Top Priority has to go to race if I want a “metahuman” (in this case an orc). Next priority will go to Tech / Money since that’s how you build a network of contacts. Then it’s magic, attributes and skills. Lowest will be magic (since only the top two can give you magic, so there’s no point putting anything but the top or worst priority to it), with skills slightly outranking attributes.

So it ends up as:

I’ll start by spending his attribute points. 17 points doesn’t go far between 6 stats. Fortunately, being an Orc, he can be weak for his race and still strong in comparison to humans. Attributes are rated from 1-6 for humans. So our orc don gets the following

He gets Essence 6 to start, which will be modified by cybernetics.

And then it is time to spend some money. 400,000 Nuyen of it, in fact. A gang costs $15,000 – a bunch of very loyal goons with skills and attributes of 3, of which 2d6 are available at any time. His right hand man, Jimmy Two-Feet (as opposed to his contact Jimmy From Down The Block), is another Orc Mafioso with skills and attributes of 4 who is very loyal and costs him $10,000. The close members of the family set him back $200,000. As many as 5 different archetypes will come at once when called, d6+1 of them available at any one time – and start with the standard archetypes for the game (street samurai, mercenaries, a couple of riggers and so on). And of course, as a mafioso, he needs contacts. The aforementioned Mafioso Jimmy From Down the Block costs $5k, and the local bartender is another $5k. There’s a pair of elven hitmen he’s hired on occasion (another $10k), and the leader of a lower-class gang of orcs for another $5k. Because friendly competition is better than deadly in many cases, he also knows the local Mafia Boss (5k), and for when things go bad, a street doctor (5k). In total, he’s spent $260k on friends, leaving him with $140k for gear and pocket change.

He’s a mob boss. He needs a built in telephone because cellphones are just such a pain in the ass ($3,700, .5 Essence). Some heavy dermal plating will also help make him bulletproof (Level 3 Dermal Plating, $45,000, provides +3 body for reducing damage, 1.5 Essence), and of course, on the lookout for poisons (and so he can outdrink anyone), he needs a rating 5 blood toxin filter ($50,000, 1 Essence). So he’s spent 3 Essence… leaving him with 3 for future enhancements, and $41,300 to spend. A Ford Americar gets him around town quietly ($20,000) although he needs Jimmy Two-Feet with him to drive it (as he has no driving skill). A Lined Coat is typical of his style (trenchcoat squad!) for $700, but under that he has to wear some fine clothing, and keep a couple of spare suits around in case of bloodstains ($1,500).

For sidearms he carries a Remington Roomsweeper (a teeny-tiny shotgun that pretends to be a pistol – $500) and in the Americar he keeps an Enfield AS7 – a real shotgun – with a 50 round drum magazine reminiscent of the old Tommy Guns. ($1,000) Both with laser sights, and of course in homage to the impossible courtesy of No Country For Old Men, they both have silencers of course. ($2,000).

Of course he needs a Pocket Secretary (which is basically a wimpy version of a modern smartphone – not to use as a cellphone, but for the other features… mostly the games) ($3000), and a basic Docwagon contract (which he’ll upgrade soon, honest! $5000).

So there we have Johnny the Rock, Orc Mafioso, along with his mafia family, right hand man, and goons.