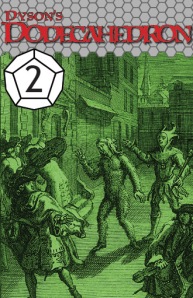 It’s been a bit of work, but Dodecahedron volume 1, issue 2 is finally here after a complete reformatting of my computer and a second run through the layout of the whole issue (as well as redesigning the base graphical elements).

Because of the rushed redesign, this issue contains none of my poorly-done hand-drawn artwork outside of the dungeon map. And speaking of which, the original dungeon that was to appear in this issue got bumped for one I had the full developed version on hand for. The original one will appear in a later issue.

For those unfamiliar with Dyson’s Dodecahedron, it is my blog-zine of B/X D&D articles, adventures and miscellaneous stuff. All content for the zine (at least for these two issues) can be found on the blog itself, but are reformatted and edited and then released in a digest-format PDF for your home use (and even printing if you want to stick them with your other digest-sized old-school RPG products).

The contents of this issue are: