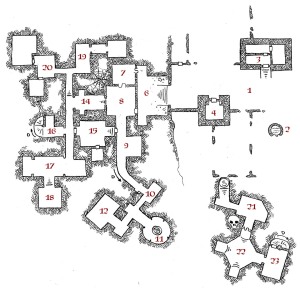 Today we return to the upper level of Erdea Manor and finish stocking the area before we head into the first of the three lower levels this Friday. It seems I must have been half asleep when I added the key to this map, as not only did I not put a room 5 on the map (which I noticed when I stocked the first half of the level with ogres), but I also seem to have completely missed the number 13.

This part of Erdea Manor was stocked using some material from the Advanced Edition Companion for Labyrinth Lord – so to use it in a B/X or Labyrinth Lord game  yo would need either a copy of that (available for free) or a classic 1979 AD&D Monster Manual.

So today we start with room 14.

14. Trapped Entry. The obvious descent from the entry area, room 14 was trapped by some previous tenants and the Ogres have avoided it. A pressure plate covers a ten-foot length of the room extending from one alcove to the other. Anyone weighing over 30 pounds stepping on this 40 x 10 area will likely trigger the trap (1-4 on 1d6). When triggered, a cold sleeping mist blasts into the room from both walls, accompanied by a loud whistling sound. Living beings within the room must save versus poison or be knocked unconscious for 1d4+1 turns. The whistling sound will also attract the attention of anyone alive in rooms 8, 17, and 19.

15. Secure Entry. In an effort to control the flow of ogres into the dangerous lower areas of the manor, Vera and Jubal have tried securing this room, at least making it very noisy for anyone to proceed. A collection of furniture has been piled up against the western door which opens into this room. Anyone pushing through from the west side will need to push the pile of furniture out of the way using the door, while those wanting to open it from inside the room will have to move the furniture first. In the middle of the room there is a small pile of burned debris from a fairly recent camp fire. The small room to the south was being used by the dwarves to store supplies and has been thoroughly ransacked, with wrecked barrels and crates littering the floor and only a couple of pickaxes left.

16. Descent. A small alcove is at the top of a set of very well made stone steps twisting down into the depths. Jubal’s second quasit (known as CueTwo) is stationed here (invisible), waiting for Vera to return whereupon he will alert Jubal and assist in killing her. However, if the quasit sees adventurers descending these stairs, he will follow them instead of maintaining his vigil, assuming that the adventurers have already ruined Jubal’s plans. He will follow them until they encounter Vera and will then attempt to assist them in fighting her. He will then return to his invisible state and wait for opportunities to make the adventurer’s lives miserable – setting off traps, interrupting sleep (and spellcasting), and attracting the attention of monsters.

17. Jubal’s Explorations. These rooms served as a shrine in the original manor and are currently home to Jubal, a particularly nasty piece of work for an Ogre. A year ago he split his dark and twisted soul into three pieces – one that he keeps himself, and two that have split off into smaller little “essences of Jubal” that he calles CueOne and CueTwo (and that are, for all intents and purposes, Quasits). The room is divided into three segments – an eastern antechamber lined with benches built into the walls, an empty main room (with stairs up to the smaller private shrine and faded murals of human holy days) and the western “alcove” which contains a carved stone pulpit that currently has an open book on it and a massive and ornate iron lantern. CueOne is in this room, standing (invisibly) on the pulpit trying to make sense of the book. If the characters are stealthy enough he will flip the page and give away his presence (or at least make it look like the book is reading itself). He’ll scream to alert Jubal before trying to mess with the adventurers. Unlike CueTwo, CueOne is very Ogrish in his tactics, attacking directly and going for the throat. The book is the Tome of Cruel Lies, which details many curses and also empowers any spellcaster that has studied it for a month, making their Bestow Curse spell more potent. Resisting the curses bestowed by someone who has mastered this material is more difficult (-2 on saves) and if using the random curse tables, the caster rolls twice and picks the best result.

18. Private Shrine. Jubal has converted this private shrine of the Erdea family into his headquarters. The room is lit by a dozen candles and is decorated with the intestines of several slain dwarves. Jubal is a dark and twisted ogre with some spellcasting ability (although no Ogre Mage by any stretch of the imagination). He can cast Bane (the opposite of Bless), Protection from Good, and Fear, each once per day as a level 4 cleric. His massive staff with dangling skulls and feathers makes the targets of his fear spell save at a -2 penalty. The magical charms on the staff can be transferred to a smaller staff or similar weapon, allowing the magical benefit to be passed on to smaller spellcasters. Jubal also has a trunk under his makeshift bed containing 1,000 gp and a wand of magic detection with 14 charges.

19. Ogre Quarters. Orthur, Jubal and Vera’s lieutenant, is based out of these rooms along with whatever ogres he has in his company at the time. Currently the main room has one ogre in it attaching new spiky things to his club, while Orthur is in the back room wishing that Jubal and Vera would get along. Both will react to any loud noise coming from areas 14, 15 or 20.

20. The Dying Bull. This area was once used as emergency living quarters for the Erdea family, but was more recently converted into a small tavern by the prior dwarven inhabitants. Now the place is a disaster, destroyed by ogres looking for free beer. A prolonged search of the area, digging through the ruined furnishings and casks will find the warhammer of the dwarven clan leader – a +1 warhammer that deals an additional +1 damage when wielded by a dwarf with a nice beard and 13+ Charisma.