Like the Circle of Doom I posted on Friday, this is another pencil-drawn map I made last year (and used in the same Labyrinth Lord / AEC campaign) and didn’t want to post until I had stocked it. The Roots of the World were where the party had to collect a water-based artifact (they got the fire artifact in Ember Crag). The place is flooded knee-deep in water (with the massive central area having much deeper sections), and the central area is a massive cavern with regularly spaced stone columns. However, these columns are the “Roots of the World” and any attack that strikes them makes the whole place shake and rumble (everyone in the dungeon makes a save versus Petrification / Paralysis or cannot move for one round).

The Roots are home to a lot of Toads (see the racial class I posted last year), along with some massive toad ogres (using Ogre stats, except they can make a special attack once every six rounds that stuns everyone within 120 feet who fails a save versus paralysis – this is usually a massive bellow, but could also be slamming the ground with their massive clubs or something similar). The southern section (the old fort on the southern plateau) is currently home to a small team of hostile gnomish explorers.

When I ran this, that’s basically all the notes I had, the rest I made up as I went along. So I recommend you do the same. Alternately, you could actually take the time to stock the Roots of the World and I’ll post your version (or link to it if you post it to your own blog). 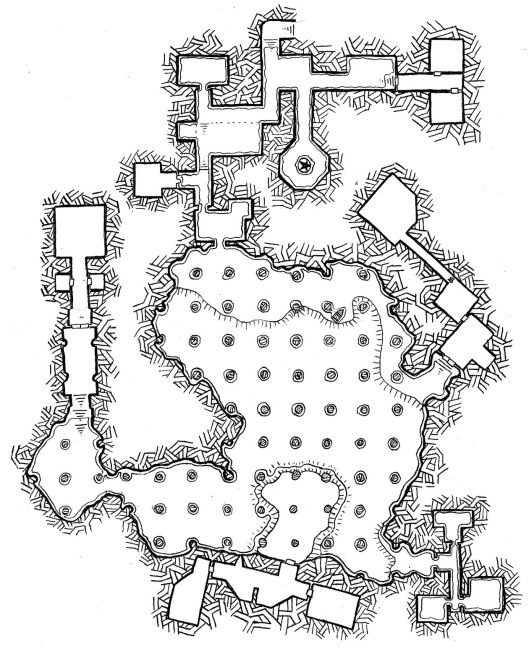 The Roots of the World