The Tomb of Dûrahn Oakenshield

The first map I posted here was the one I drew for the 2009 One Page Dungeon competition – The Tomb of Dûrahn Oakenshield. I drew this map three or four times before posting it – in pencil and pen, and even tried an isomorphic view to explain how area 2b is 20 feet over area 2a and 30 feet over area 2. This map predates me seeing the awesome maps being drawn by one of the new players in my group which became the inspiration for my later dungeon maps.

But it was those maps, and the scanning project over at A Rust Monster Ate My Sword, that got me drawing maps again, and posting them. That new style is best exemplified by the Dwarven Barracks at Kuln (which show up referenced in my recent Challenge of the Frog Idol module), and in the insanely convoluted map affectionately know as the Mapper’s Challenge. 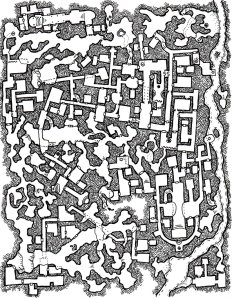 I like the Mapper’s Challenge map enough that I’m going to look for the original drawing, re-scan it at 600 dpi, and look into printing poster-sized versions of it as part of the half-million hits celebration.

More recently, I started testing the waters with some new techniques and working in pencil. In the end, I’m back to using ink because it scans so much better, but some of my pencil-drawn maps are pretty awesome. I also have a pencil-drawn mega-dungeon that I haven’t scanned yet that I really should scan and post – but because I never finished two levels of it, I keep putting it off. Of my pencil-drawn maps, the Lost Crypts remains one of my favourites. 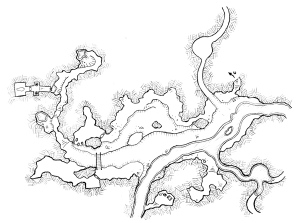 Finally, any discussion of my maps is incomplete without me once again aiming readers towards my two-part Tutorial Dungeon, where I scanned my progress step-by-step as I drew a side-view map, and then later posted a full version of the dungeon. It not only finally presented a rough overview of how I map, but the finished version is one of my favourite maps that I’ve never actually had the chance to use. 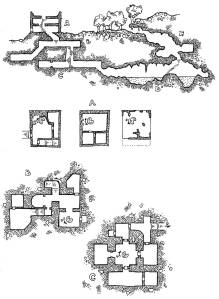 I try to keep a compilation of the maps I’ve posted to the blog over on the Maps Page (although I haven’t updated said page in some time now). What maps of mine are your favourites?