Remember Erdea Manor? It’s a four-level dungeon adventure I started on ages ago. Well, here’s the next part (finally) of level 3, detailing the flooded area to the southwest of the map (areas 65-69). 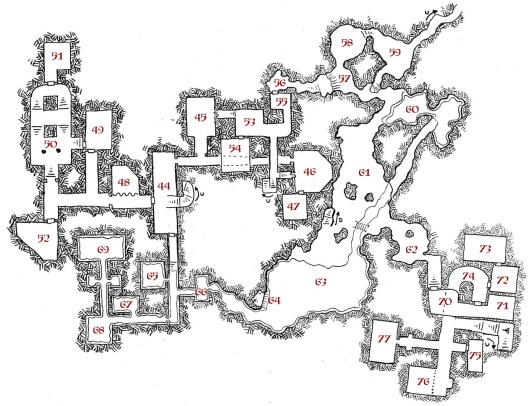 65. Welcoming Party. This chamber is flooded with the murky waters of the lake to a depth of 2 feet. The flooding marks the dividing line between the portion of the Erde clan devoted to the god of war, and the remaining members of the clan who have hidden here and devolved into strange rubbery throghrins in the flooded lower areas. Three throghrin (AC:6, HD: 3**, hp: 13, 16, 16, Mv: 120 (40), Att: 2 or 1, Dmg: 1d3/1d3 + paralyze, or 1d10, Sv: F3, M: 10) defend this chamber and watch for encroaching members of the northern part of the clan. Two wield polearms, and the third attacks with his bare hands. They also watch for those who would sneak in through area 66. In dire emergencies, they will try to escape to area 68 and ring the gong.

66. Breached Chamber. Once a storage chamber, erosion from the lake breached into the depths of Erdea manor here. Beyond the breach in the wall, the water depth is some 8 feet initially and drops rapidly to the depths of the Deep Lake (area 63). Within the chamber the water is at a depth of 2 feet. The walls of this chamber are covered in shelves which are in turn enveloped in a particularly noxious slime mold. Anyone trying to scoop or dig through the mold must make a save versus poison (with a -3 penalty if doing so with their hands instead of tools) or become violently ill and be unable to continue for 1d6 turns, as well as engaging in any combat during this time with a -2 penalty to attack rolls and saves. Within the slime mold is mostly rotten foodstuffs, but there is a small locked coffer containing 1,000 sp, as well as a small secret compartment in the wall behind the coffer that contains a pair of 500 gp rubies.

68. Meeting Hall. This small chamber has ancient moldy tapestries decorating all four walls, and a 3-foot brass gong is suspended by chains from the ceiling in the southwest corner. The ringing of the gong can be heard clearly throughout this section, and can be heard faintly even at the deep lake. Ringing the gong has a 75% chance to result in a roll on the wandering monster table, as well as alerting the remaining throghrin in the area.

More Erdea Manor to come next week, with the rest of level 3 and hopefully level 4!