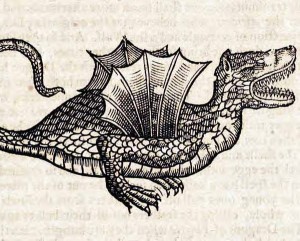 Back at the turn of the century, I remember a lot of talk on the message boards about “making dragons special” and how they were overused and underplayed in D&D. How they should be powerful, uber dangerous, and basically a capstone enemy – not sword bait.

I’m the other camp though. This is Dungeons and Dragons we’re playing. Not Dungeons and Orcs. I use dragons pretty frequently in my games, because damnit, that’s what the game is about. Now, I don’t just throw “out of the book” dragons at the players, I like to reskin them and make them unique, but I definitely don’t skimp on them.

And Matt over at Asshat Paladins, he’s into the whole dragon-dicing business also. He’s doing a great set of articles each presenting a dragon for Swords and Wizardry for a different level of party to encounter, starting at level 1. Yeah baby, level 1 dragon-slayin’ heroes! Each of the dragons is fully described with background, accomplices… and maps.

Maps so far from myself and from the other Matt over at ..lapsus calumni..

So check out the awesome – Killin’ Dragons

4 thoughts on “Using Our Maps and Killing Dragons!”