One of the games I occasionally day-dream about when thinking about my early gaming days is the classic CRPG Wizardry. With Tenkar putting together Swords & Wizardry appreciation day, the name triggered those memories again.

One of the classes I liked a lot in Wizardry was the Bishop. The bishop combined the spellcasting of the Priest and the Mage classes, along with the ability to identify magic items for the party. I have written up a version of the Theurge for Labyrinth Lord that will be appearing one day in the forthcoming Magical Theorems & Dark Pacts, but the one I’m putting together for Swords & Wizardry will try to hold closer to the Wizardry I version that I’m reminiscing.

Bishops combine and blur the magics of magic-users and clerics. They are devout worshipers who are not granted spells through prayer, but who instead learn divine incantations and magics hinted at in liturgical texts. They are often in the roles of sages and liturgical experts, delving deeply into ancient texts searching for the gifts of magic.

Bishops carry liturgical spell books, which hold the formulae and incantations for their spells written on their pages. A bishop can have any number of spells in their books, but can only memorize or prepare a certain number of spells at any time. Effectively they prepare and cast spells as a magic user, but use a special spell list of their own. 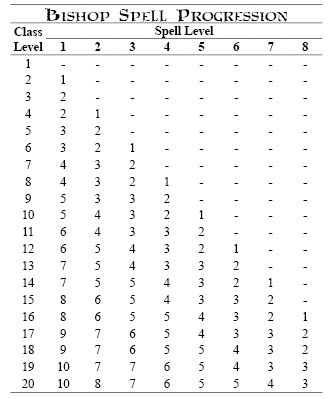 Further, the divine knowledge of magic that bishops possess allows them to use any magic user and cleric scrolls, even if the spell in question is not on their spell lists. They can also use all magic-user and clerical magic items.