The Screams from Jedder’s Hole was originally published in the innaugural issue of Brave the Labyrinth which is still available for download for free.

There’s a hole in the floor of the temple of justice. On the hottest days of summer you can feel the cool dampness almost seem to crawl out of it into the main room of the temple. The hole is quite deep, at least a hundred feet, and the space below is significantly wider than the size of the hole.

Once, in a crueler age, prisoners were lowered into the hole by the order of King Jedder. Originally a prison, under the rule of Jedder it became a death sentence – no guards were posted in the hole and no one was ever released from it. The only way in and out was by the rope that lowered new prisoners down.

The practice of using the hole as any sor of prison ended over a century ago, and now the hole seems to work more as a method of keeping the temple of justice cool and a reminder of the extremes to which the law has gone in the past.

Until now. The screaming has begun.

The classic method to get the party involved in this adventure is to have one of the clergy of the temple approach them regarding the problems coming from the ancient prison and execution site and offering them a reward for clearing it out.

More interesting would be to have a ceremony that the group is at occur at the temple of justice and for the screaming to begin then. But don’t just conveniently have it happen the first time they are at the temple. Introduce the temple and the hole a few sessions before the adventure. Have the party meet someone at the temple, have them attend other functions here… perhaps the local lordling always rewards his servants and adventurers with small public displays of awesomeness, always at the temple of justice.

When the party arrives this time, the ceremony they are here for is sidetracked as the wailing begins. Here’s some sample ceremonies to get things rolling:

A few minutes into the ceremony the wailing begins – obviously coming from deep within the hole, but loud enough for all to hear it clearly. Anyone in attendance under level 3 / 3 HD must make a saving throw versus spells. Those who fail quake in fear, although those who fail the save by 10 or more are drawn to the edge of the hole, looking down in shock and horror, and eventually begin to throw themselves into the depths. It will take 2d10 minutes of looking into the hole before someone throws themselves in, so there won’t be any jumps for the first two minutes of the wailing screams. But then the first people begin to plummet to their deaths, and the numbers increase rapidly unless someone can put things to order.

Persons of level 3 or higher must still make the saving throw, but a failed save only causes feelings of uneasiness and perhaps mild paranoia and distress, resulting in a -1 penalty on all saving throws for the next 24 hours.

There are two ways into the hole. The obvious one is the hole itself, although ropes must be secured first and this descent may be fraught with dangers as the depths are dark and unknown. Brother Helmad the Bold (Cleric 3) knows of the other way however, an ancient sealed secret door that was used to enter the hole in the era before the rule of King Jedder. The secret door is concealed in the room that is now the office of the Archivist General (who is currently staring down into the hole, with a very freaked-out look in his eye).

The few survivors in Jedder’s Hole when it finally stopped seeing use have long since devolved into fierce morlocks that compete with the cave locusts and carnivorous beetles that share their domain. With the death of the last of the bloodline of the Morlock kings (descended from an elven enchanter imprisoned here ages past), a great evil has been released into the hole, and it has raised many undead from the bodies in the place, and now seeks to draw in more to feed it until it is strong enough to escape.

Jedder’s Hole is unlit, with only a tiny bit of sunlight filtering into area 1 from the hole above. Beyond that is utter darkness, damp and foul. The entire complex is deep beneath the city, with the main level of the floor (in area 1 and most contiguous areas) being 135 feet below the main chamber of the temple of justice and over 140 feet below street level. Besides the secret door leading into the hole, all doors on the map are made of iron and are thoroughly rusted.

The initial entrance into the hole is a long spiraling staircase cut into the wall of the hole proper and leading into area 1. The very top of these stairs is covered in the bones of the dead, many appearing to have died trying to pry open the door from their side of the stairs.

The entire time the party is in the hole, the sound of the wailing will be clearly audible and grating. Because the bloodline of the morlocks is the same as that of the beast, the beast’s screams do not affect them.

Wandering Monsters in the Hole

Roll every turn, 1 in 6 chance. Also roll whenever loud combat occurs or the subterranean locusts begin chirping. If a wandering monster is indicated, roll 1d6 on the table below.

* Once the beast in area 11 is destroyed, there will be no more wandering monster encounters involving wights and ghouls. If these results are rolled, ignore them.

** If the morlocks in area 7 are slain, this encounter can only occur two more times. After that ignore this result when rolled. 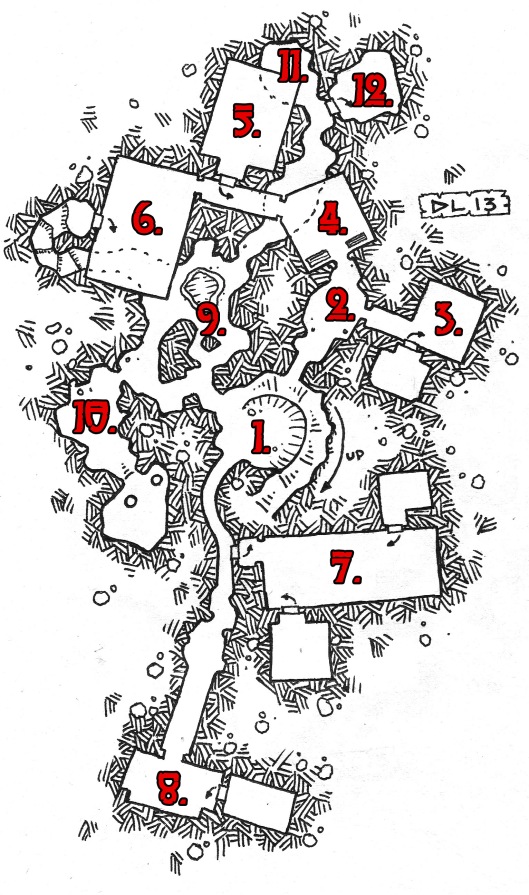 The bottom of the hole is covered in the debris of ages of refuse thrown down here amidst human and demi-human bones (and probably a few members of the congregation by now, potentially more falling down the hole as the characters progress). Unless the party prevented the suicide leaps they will be greeted by the sounds of ghouls tearing apart the fresh corpses, barely audible over the sound of the continued screaming and wailing. Unless the party is particularly stealthy as they descend the stairs (no light, very quiet), the five ghouls  (AC: 6, Mv: 90 (30), HD: 2, hp: 11, 4, 15, 3, 7, Att: 2 claws / 1 bite, Dmg: 1d3 (x3) + paralysis, Sv: F2, M: 9) will become aware of them before they reach the level of area 2 and will run up the stairs to engage them, but also to get past them and hopefully get to the surface.

The three entries to this area were obviously once secured by locked doors, of which only bent and twisted hinges remain today. The walls have niches cut into the stone where torches were once held, giant bug feces and a few well-gnawed-on human bones lie scattered on the floor.

On the south wall of this room is a rusted iron door leading to a smaller room. Water trickles into this room through a crack in the wall, feeding the mushrooms that grow in both rooms.

All that remains to indicate this was once a library are a pair of wraught-iron bookshelves too heavy to be easily looted. Over time all the books in this room were burned for light and heat. Five prisoners who tried to prevent the desecration and destruction of the last literature they had access to were killed here and then cooked over the burning books. They haunt the room to this day as shadows (AC: 7, Mv: 90 (30), HD: 2+2, hp: 14, 8, 6, 13, 12, Att: 1, Dmg: 1d4 + 1 Strength Drain, Sv: F2, M: 12). All that remains of the treasures they once guarded is ash and dust. They ignore non-sentient and undead invaders in their domain, focusing exclusively on the morlocks and now the characters.

The door to this room is jammed in a partially-open position. The floor of the room, like all others in the hole, has a plethora of old bones scattered about it, along with insect droppings and exoskeletons. A thin layer of fuzzy fungus has begun to grow over the dead insects.

This room has been picked clean by the locusts as they gradually move through the operations level eating fungus. The door at the back of the room is rusted shut and opening it is at -2 on the open door check (and each attempt, successful or not, requires a wandering monster check from the loud creaking of the long-seized hinges).

Once used for solitary confinement, the lockup has been converted into a crypt for the line of morlock kings. The only king missing here is the last king of the line, who is still in area 12 where he died. Six morlock myrmidons (AC: 7, Mv: 120 (40), HD: 2, Att: 1, Dmg: 1d6+1, Sv: F2, M: 8) stand guard in the main room and defend the brazier in the middle of the room as well as crypt in the next. The brass pedestal-mounted brazier contains the last wood and charcoal in Jedder’s Hole as well as a small compartment in the base containing flint and steel for lighting it. The charcoal is only lit during funerary rites and other major occurrences for the morlocks.

The pool ripples quietly in the darkness, however the pool is completely devoid of life. The rippling is because there is a constant in and outflow to the pool from an underground spring, keeping the water fresh and cold.

At the top of the stairs is a cavern that is the home of the morlock warlock (AC: 8, Mv: 120 (40), HD: 4, hp: 1, Att: 1, Dmg: 1d4, Sv: M1, M: 6 – Special: sleep spell 1/day). Once a level 4 magic user, he has been drained to level 1 by the two wights (AC: 5, Mv: 90 (30), HD: 3, hp: 8, 18, Att: 1, Dmg: Energy Drain, Sv: F3, M: 12) in the room who are currently ignoring him as he crawls along the floor, reduced to a single hit point. Instead they are searching through the room, looking for the warlock’s amulet for their new master. The warlock has hidden the amulet in the corpse of one of his assistants who then reanimated as a ghoul. The warlock’s amulet of blood is a spell adder II (allowing the owner to prepare two additional spell levels of spells each day) and the wearer may cast protection from evil lasting four times the normal duration once per day but at the cost of suffering 2d6 damage as the amulet draws life force directly from the caster.

When the last morlock king died last night, the demonic entity that his ancestors had bound to their flesh was finally released. It has grown out of the corpse into a all that remains of the morlock is a hideous torn-up parody of a human being through which the mighty tentacular growths of the extradimensional evil is manifesting. This beast (AC: 8, Mv: 30 (10), HD: 8, hp: 38, Att: 3 tentacles, Dmg: 1d10x3, Sv: F8, M: 10) has consumed the entire funeral party that was carrying the morlock king’s corpse through the hole one last time before entombing him in the crypt, and is now seeking new sources of food. Its haunting scream can be heard by all within 400 feet, drawing them to be consumed. The beast can cast cast darkness 10′ radius, charm person, dispel magic and detect invisibility at will. Although it moves very slowly, its tentacles can reach targets up twenty five feet away. When slain, the beast practically explodes, showering ichor and its remnants throughout the room exposing the skull of the morlock king, now the beast’s heart. The skull has been transmuted into a sixteen-pound crystal skull that serves both as a crystal ball with ESP and a pearl of wisdom.

5 thoughts on “[Adventure] The Screams from Jedder’s Hole”