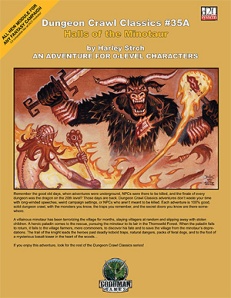 So it is 90% settled. Tonight’s game will be short one player (my girlfriend got the shaft from her employers and has to be up at 4am tomorrow morning, so no night gaming for her tonight), so instead of pulling out our usual 3.5 game, I’m finally going to run a Dungeon Crawl Classics “character funnel” game.

Most of you probably know the basics of the DCC RPG, but for those that don’t, a funnel game is where each player makes 4 characters using the classic 3d6 in order mechanics, but they are all level 0 characters like glove makers and farmers. The survivors of the adventure (usually 1-2 per player) get to level up and become level 1 characters)

After flipping through what modules I have, I settled on the Halls of the Minotaur adventure (by the awesome Harley Stroh) which was included in the DCC 35 boxed set. It’s designed for 4-6 level 0 3.5 characters, so I’ll run it with 12 level 0 DCC characters and maybe throw in a few extra kobolds along the way if things look too easy. I ran this adventure back when DCC 35 first was released, but none of this group was gaming with me back then, so it’ll be fresh for them.

I’ve printed out Kirin Robinson’s excellent DCC Funnel character sheets and a page of torch sheets too, just in case. I’ve got my rule book and my module at the ready. 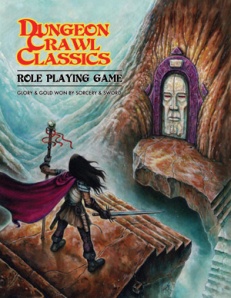 So, DCC fans, anything in the game I should “watch out for” as something I’ll forget is different when running this instead of my usual B/X D&D games or 3.5 D&D games?

I don’t have the mighty zocchihedrons available, so I’ll be faking the d16 and d24 rolls with d12s and d8s. And spellcasting isn’t something I have to worry about for this game since level 0 characters don’t have that ability yet.