The small community of Ravenson’s Landing lies in a shallow bay by a small river, a useful source of freshwater for traffic near the Hill Islands who wish to remain away from the major ports in that area – pirates, privateers and smugglers for the most part.

The inlet and community is on the edge of a forest and is easily spotted by those searching for it by the silhouette of Ravenson’s Tower which overlooks the few nearby houses.

Slightly to the west of the settlement is Partridge Cave partially hidden in the woods. Partridge Cave is home to the secrets of Ravenson’s Landing… whatever they may be… 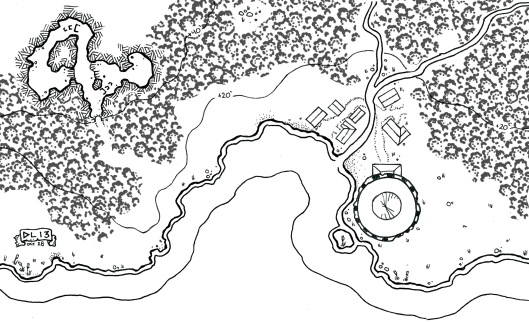 Ravenson’s Landing is the first map I drew in a new sketchbook I picked up at Chapters on October 26th of last year. I drew the map using a 0.5mm gel pen, with the areas where I would screen in the trees purposefully left unmarked so I could use the tree screen that I had used for the first time a few days before on a map I drew for the 2013 Secret Santicore.

Ravenson’s Landing is available for your use under my standard non-commercial license. These free maps are available courtesy of the awesome people who patronize my work through my Patreon Campaign – people like Joe Banner and Henry Wong who pay for these maps to remain free for everyone’s use. If you like these maps, and want to contribute to their continued creation, check out my Patreon Campaign and help out if you can. As of this month, Patreon also accepts Paypal as well as major credit cards.