GraniteSpire is a coastal city west of the Hill Islands, and a regular point of trade for ships heading to and from the Hill Islands. The entire city is built up on a granite plateau that lurches sixty to eighty feet out of the sea. There are two ways to access the spire – there is a lowland port on the east coast of the spire with a tunnel that leads up onto the plateau, and there are a pair of bridges from the mainland that lead in turn to the “Stepping Fort” and then to the spire proper.

Slightly to the south of the Stepping Fort island is another sloped island with a fortified presence that houses the main fishing depots of the city. 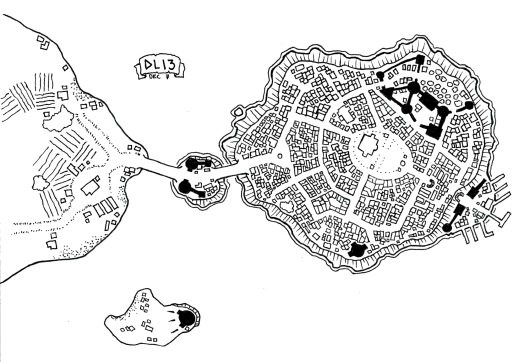 GraniteSpire – because nothing says “Happy Valentine’s Day” like a chunk of wet rock sitting in cold inhospitable seas.

GraniteSpire was drawn in a single draft using a Micron 01 in my sketchbook. For some ridiculous reason I ended up cramming all this into 2/3 (at most) of the page, leaving large blank areas of ocean around the city map.

It is presented here free for your personal use thanks to Stephanie Bryant, Gary Montgomery, and Brett Slocum who are among the many patrons of the Dodecahedron. If you like this map and would like to contribute to the continued production of such maps, check out my Patreon campaign where you can assist in the continued creation of similar content for as little as 5c a map.