Over the last two sessions I’ve customized a pair of adventures for my DCC crew “on the fly”. I can’t be bothered to do the conversion work ahead of time, so I just make up stats for the monsters as we go and I hope that it works. 😉

As I mentioned last time I was discussing our Chagmat DCC game, the adventure is distinctly broken into two sections and getting from the first to the second requires… a bit of work. The second half of the module is a neat exploration game where wandering monsters are a LOT more of an issue than planned encounters – almost all the rooms in the dungeon are actually empty, with the inhabitants being on the move throughout the dungeon.

Including a black pudding! It turns out I’m not the only designer who thinks that black puddings are an appropriate enemy for level 1-3 groups.

The final chamber of the adventure (pictured above) is home to the climactic battle against the chagmat – who eked out two near-deaths (two characters reduced to zero hit points, saved in one combat round… one has permanently fucked up ribs from a hand-axe blow to the side, the other caught a cause light wounds to the face and will carry the scar of his split open nose and cheek onwards).

Best moment however was the Bard singing the following to keep some chagmat fighters chilled the fuck out during the final battle:

After coming back from Little Boy Mountain with their rescued maidens, the party traveled towards Dunsport which turned out to be a tourist trap for adventurers – instead of finding adventure in the ancient necropolis next door, the whole place had been looted out. Leaving their cleric and ranger behind, the party rejoined with their elven companion and his street urchin sidekick from Brenovia. 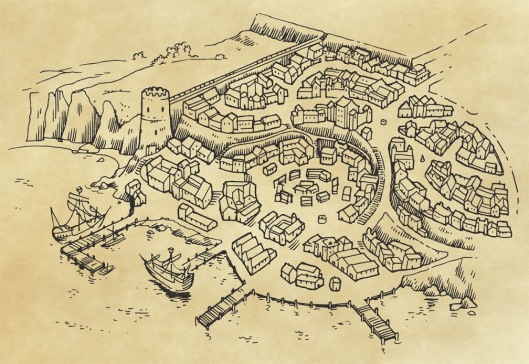 Map of Dunsport by Jason Lutes

The Brenovians had heard of adventure to the north, at the Keep on Javelin Hill (up on the borderlands) where the Castellan has been snapping up adventurers and supposedly offering piles of treasure for their work. A keep… on the borderlands…

While travelling north to the keep (after dealing with some religious fanatics who seemed to want to kidnap the street urchin for whatever reason), the party wandered into the small settlement of Imp Brücke. Warned by the locals to stick to the road as they left town, the party of course investigated the fallen tower north of the settlement (even though it was described as “a death sentence”). And sure enough, even though they were more than able to handle the hurricane of bloodsucking stirges about them, the stirge nest itself gathered up O’Mac, the 17 Strength Wizard (and least lucky member of the party… not to mention least agile) and ate him.

5 thoughts on “DCC vs the Spider People!”