My girlfriend is developing a serious dice fetish. As in one that is rivaling my own. This becomes important because it turns out that none of the art stores around my place have the Sakura Micron pens that I use when drawing my maps, and my 01 and 005 microns are pretty much dry. So I wandered over to Amazon to pick up multi-packs of my precious pens.

If you’ve hung out on /r/RPG on Reddit, then you’ve seen people talk about WizDice and compare them to the classic Chessex Pound-o-Dice. It seems that if you are in the lucky majority, you get 17 full sets of dice when you buy a WizDice bag, and the unlucky minority actually get a random sampling of dice (but still significantly less random than the Chessex collection). Lately I’ve been seeing more and more people getting the random assortment instead of the full sets, so I was able to avoid pulling the trigger on buying a bag for myself.

But since I was already making an Amazon order… And I could always gift many/most of the dice to my girlfriend and make her giddy, I figured what the hell.

So this arrived in the mail today:

I waited until she got home and gave her the immense joy of tearing open the bag and sorting out the contents. We were in the lucky majority and scored 17 full sets of dice. 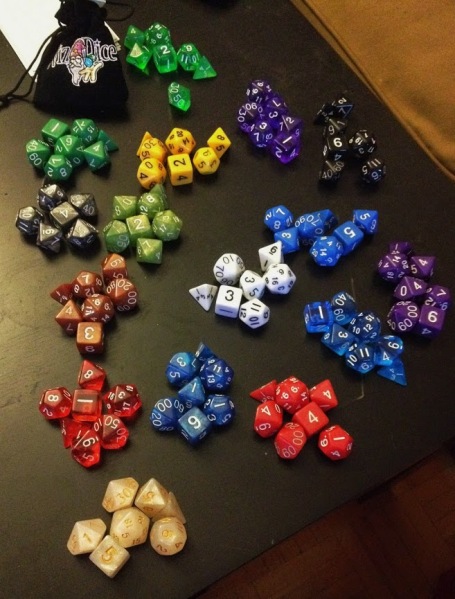 The seventeenth set is still in the little WizDice dice bag and is a red opaque set, identical to the one on the lower-right side of the photo. The hardest part was then splitting up the spoils of today’s dice hunt. In the end I went with the opaque white and the opaque black (because that’s what 90% of my in-play dice are already), grabbed the steely black shimmery ones, and then the translucent purple set because the very first set of dice I bought for myself (that I can remember at least) were that colour and nostalgia is a cruel mistress. In the end I ended up finishing off with all the translucent sets, and the red opaque set (we each got one, she got the set with the bag since I have a plethora of dice containment sacs).

The only downside to the whole thing was a lack of orange dice. She loves orange.

The WizDice aren’t quite as sharp edged as the current Chessex stocks, and end up feeling a bit more “old school” because of this (they feel like the polished dice of the early 80’s instead of the current batch of polished dice). Also, they still use the classic d4 orientation which brings an even stronger sense of nostalgia into the mix (I’m actually surprised by this – the transition to the “top number” d4 makes so much more sense than the old “bottom number” system) – heck, you don’t need to explain how to read a d4 in an introductory RPG book anymore).

Finally, the percentile dice are pretty hit-or-miss. The thickness of the lettering is thinner than on the other dice, and it feels tall and squished also. Some sets (like the black opaque set) have the percentile thickness so thin that it doesn’t feel like it belongs in the same set at all. But overall, I couldn’t care about the percentile dice because in my grognard brain, a full set of dice is 6 dice, not 7.

With those minor quibbles aside, this is still a great buy. Sure I won’t be using all these sets as my “play sets”, but now I have full sets of dice in small compartments in my dice bag for loaning out to new players or for when I want a specific colour of dice for a specific character.