If you look at the Mushroom Cavern map posted on Tuesday, you’ll note a secret trap door in one of the chambers near the entrance to the cave complex. During a multi-year dry spell, a team of mildly insane cultist dwarves converted the lower caves into a small temple and living area. When the nearby river started to flood again, they sealed the entrance to this area with a metal trap door that they would dog to keep the waters out.

Over the years, the door has partially rusted out, and now water flows through into this cave when the cave above floods. However, the flow is restrained significantly by the old door, and the result is that the flood often piles mud and debris over the door, keeping it well hidden from those who harvest the mushrooms above.

As long as the flooding isn’t extreme, the carved out portions of this level remain dry, or at least under minimal amounts of water. The natural cave funnels most of the water and mud down towards the sinkhole in the southern end which in turn connects much further down into the subterranean complexes.

While the Mushroom Cavern uses a grid size of 20’/square, this map uses a more standard 10′ square grid.

And for those who don’t use grids, I’ve kept a nice clean copy for you: 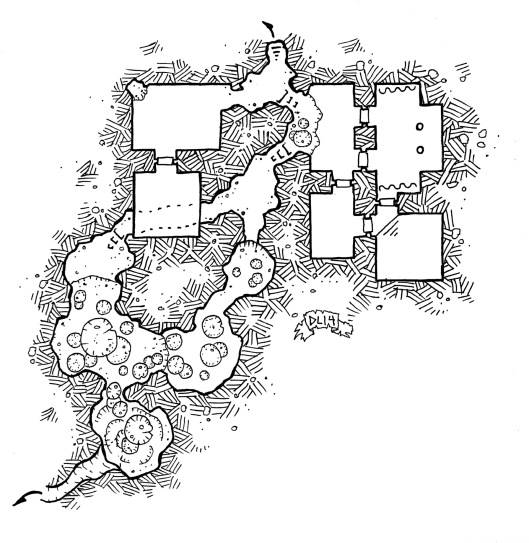 This map was drawn on 4 square-per-inch graph paper. I used one of my old 0.7mm gel pens for the walls, and a Sakura Micron 01 for the detail work (mushrooms, doors and crosshatching).

3 thoughts on “[Friday Map] Under the Mushroom Cavern”