Once the Hall of Song where the local dwarves celebrated their family ties and recorded their lineage, this hall is now home to monstrous spiders of foul intellect and ancient hunger.

The Venomous Hall is the first map of level 3 of the still nameless dwarven city that is the centrepoint of the Mega Delve. This map sits directly below the Marble Hall map and can be reached either using the stairs down into the ravine from the Marble Hall, through the hallway from the Hall of Iron (on the right side of the map) or via the stairs from the mines below (hidden by a massive secret door that wasn’t really intended to be a secret by the dwarves who made it, but they ended up making it so ornate that it appears to be a relief carving of dwarves at work that spans two walls of the room it is in.

The Venomous Hall (with grid)

The chasm that wraps around this part of the delve is filled with a heavy fog of presumably magical origin that never seems to burn away. Crawling through this fog and in and out of the massive windows of the Hall of Song and the Planner’s Hall just above and beside it are the foul spiders who have made this their home.

This hall can also be the target for a quest given to explorers, for within the Hall of Song the dwarves kept their genealogical information and this could be of vital importance to a young dwarf scion seeking land or noble rights among his kin. 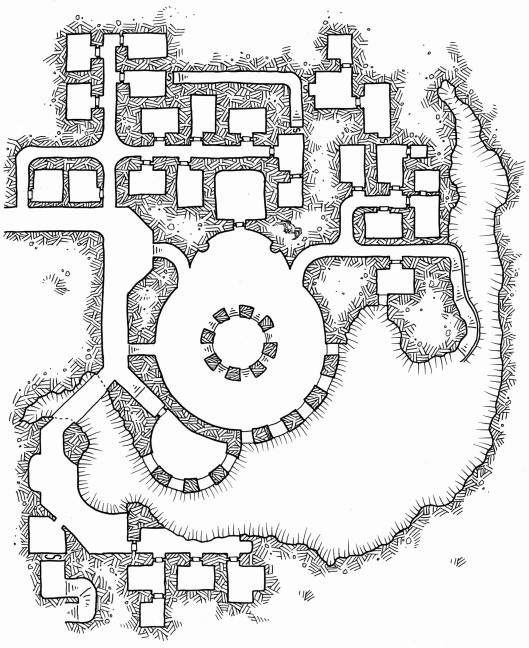 I’ve also been talking to a bunch of people about how to put together the whole Mega Delve when it is done. I’ll talk about the various options later this week.

5 thoughts on “[MegaDelve] The Venomous Hall”