On the same level as the Venomous Hall (or the Hall of Song to the dwarves who lived here) and sitting below the Hall of Bronze, the Iron Halls served as the forge and foundry for the dwarves here until they climbed back into their great Earthships and left our world to attempt to return to their own. 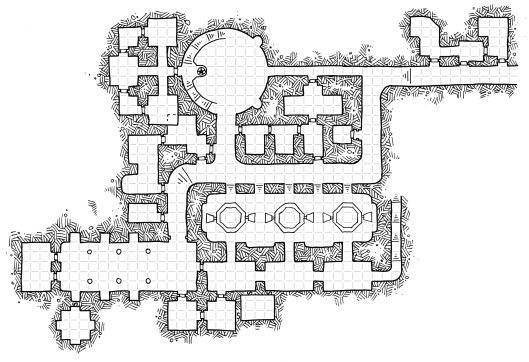 While the forges have not been relit yet, it is likely only a matter of time before the brotherhood who have started working the mines again bring fire and life back to these halls. The brotherhood are strangely near-identical hairless humans who are exploring these chambers seeking whatever the dwarves left behind that can be of use to their mining endeavours deep beneath this area. 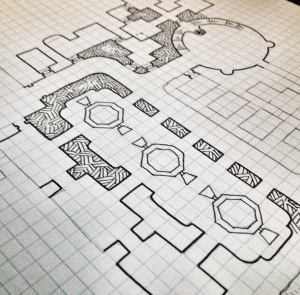 The brotherhood accesses the Iron Halls via the stairs on the lower right of the map that lead down to the mines. They have not yet used the dwarven elevator room that leads from the mines to this level and to the Hall of Bronze above (although they are aware of it). Occasional spiders venture here from the Venomous Hall along the wide passage that exits to the right of the page. The Descent also ends on this level, the 90′ wide circular chamber with stairs leading up to the Hall of Bronze and even further to the collapsed gates of the city. 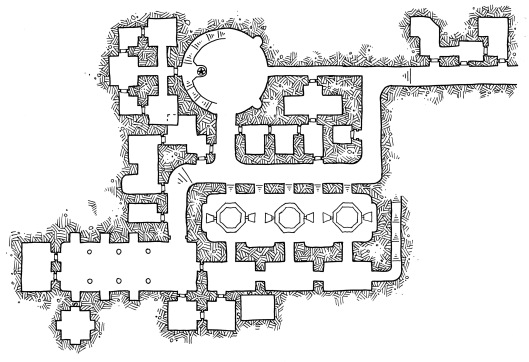 1 thought on “[MegaDelve] The Iron Halls”