When the dwarves left this world in their Earthships, they sealed this city by bringing down the front gates and burying the cisterns that provided water to the multiple levels of the city. Other access points remain (for they had built the city with more than one way in and out), but without the water, it could never again thrive.

The Gates (with grid)

Directly above the Hall of Bronze, and connected to it via the Descent (the large cylindrical chamber that links the Gates, the Hall of Bronze and the Iron Hall), The Gates were a much larger area prior to the departure of the dwarves. (I’m thinking I might draw a quick map of the original Gates that can be used as a player handout – something the local thieves’ guild had done up prior to the dwarven exodus).

Once these great halls were lit by sun and hundreds of massive bronze lanterns, and were home to parades and pageantry. Today the gates are a place of somber dust and debris, lit only by trickles of sunlight that reflect down along with feathers and other detritus from the harpies’ domain above.

The lower right corner of the great hall has a collapsed stairwell leading up to “The Tall Watch”, a tower carved into the mountain above. That tower has been taken over by foul harpies who occasionally travel this level and have even been known to fly down the shaft of the descent seeking victims and adventure. 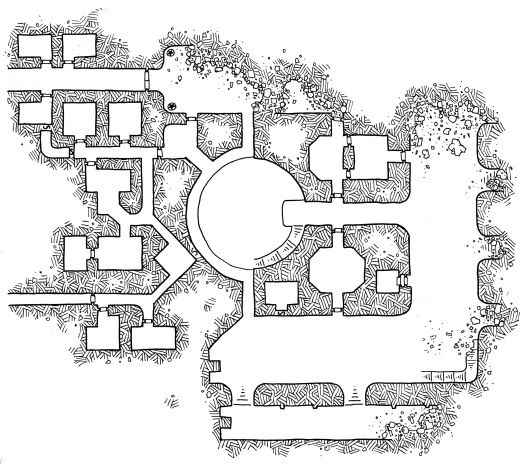 The Gates (no grid)

8 thoughts on “[MegaDelve] The Gates of the City”