After posting my remix of Kelvin Green’s Die Drop Loot Table yesterday, I figured it was time to finish off the die drop wandering monster table for the second node of the Mega Delve – that little secret area underneath the mushroom cavern. Since this particular node has a lot less creatures in it (and they are all of one faction and no one else currently knows about it), I had to be a little more creative (and at the same time, a little less awesome) with the drop table design.

This table requires dropping 2d6 of different colours. Both dice are used to determine the makeup of the group (so it could be d6/2 subhumans and d6/2 more subhumans, or 1 warlock and 1 thorny, etc). The dark die is the “primary” die that is used to determine which “What’s Going On” chart is being used (but you use the number from the light die to determine what the actual result of the what’s going on chart is, except with the middle group of subhumans where you use both dice). As usual, ignore any results that don’t make sense. Here’s a couple of shots of the table in action:

In this one the dark die is a 5 on the warlock and the light die is a 2 on the thorny. So we have a single subhuman warlock with a thorny companion. The warlock has Charm Person prepared. According to the table the warlock should be blackmailing the thorny, but that doesn’t make any sense, so instead he’s chastising the dog-thing as they wander. 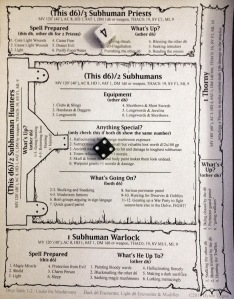 This one has both dice up on the 4 facing, with the dark die on the subhumans entry and the light tie on the priests. This gives us 2 subhumans and 2 subhuman priests. The subhumans are armed with short bows and short swords. Both priests have prepared “Cause Fear” as their spell for the day. The group are carrying a totem reliquary (the shriveled heart of the clan elder who had visions of invading dwarves) that grants them a +1 to their morale and they are on a “serious” perimeter patrol (obviously since they are carrying this fetish they believe that some foul dwarves may have breached their home). You can download the PDF of this encounter table here.

March 14th Edit: After receiveing several complaints that the original file wouldn’t download for some users, I have put up a second copy that you can download here.