I should probably figure out another name for this map. This is where Lost River (which travelled through the three Lost River Caves) re-emerges into the dungeon, a bit downriver from Lost River Cave. 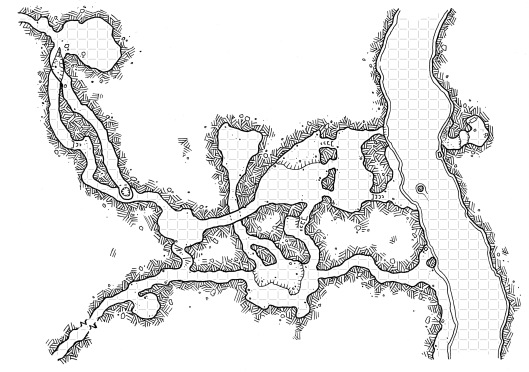 In the missing span between Lost River Cave South and here, the Lost River has run rapidly through rough caves, often fully submerged – a deadly journey for most who fall in and are sucked downriver. But should a character make their saving throws and not die during the descent, this is where they will most likely wash up – the first area where the Lost River’s bed widens again and the water flow slows to manageable speeds.

Unfortunately for anyone who does wash up here, this cave is home to a small colony of otyugh who fish in the river for the detritus that flows from the upstream caves and a truly massive giant slug that consumes whatever they leave behind.

Being a link between the Necropolis Crypts (to the upper left), the dwarven mines (bottom right) and the Muck Dwellers (bottom left), this set of caves also often sees groups from those locations seeking to expand their borders, exploring, looking for treasure, or just travelling between nodes. 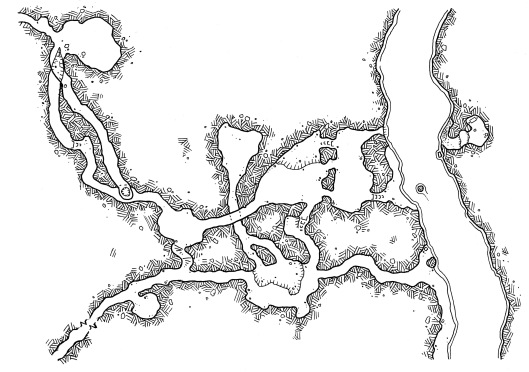 While the caves of this node were carved by underground waterways that are now dry, there is one set of stairs that stands out as being constructed. The twisted stairwell near the lower-left side of the map is evidently manufactured, but not by humans or dwarves. The stairs are low and long, and nearly perfectly smooth. They are made of a shiny pinkish material reminiscent of mother-of-pearl.