Now we head southwest from the Flooded Mines, along the Lost River to the home of the Muck Dwellers. The muck dwellers actually consist of a few different amphibian races who worked together to build these strange ovoid structures.

Home of the Muck Dwellers (with grid)

Currently, four different races make this area their home. They can be broken up into “fishfolk”, “frogfolk”, “mutant frogs” and “the jellies”. While they are seen as a single faction to most outsiders, there are heavy tensions between the races.

The frogfolk and their genetically manipulated mutant frogs live in the south end of the structures. They are also the priests of the dark shrine further to the south. They are a very religious and xenophobic group, trying to figure out how to rid “their caves” of the other species sharing space with them.

The fishfolk are warriors and hunters who pay lip service to the frog god, but honestly care little for the faith or the frogs that run it. They are also mostly oblivious to the interspecies issues at work in the caves, or perhaps they pretend they are in order to cultivate favour with both other groups.

The jellies are a race that seem like sentient hovering jellyfish. Many of them are sorcerers and warlocks, bargaining their souls and the souls of others for arcane power. This obviously upsets the frogfolk who see this as a horrible heresy – but then again, they also think the jellies are probably heretical just because of their lack of bones. They live primarily in the “palace” structures built into the northwest side of the large pool. 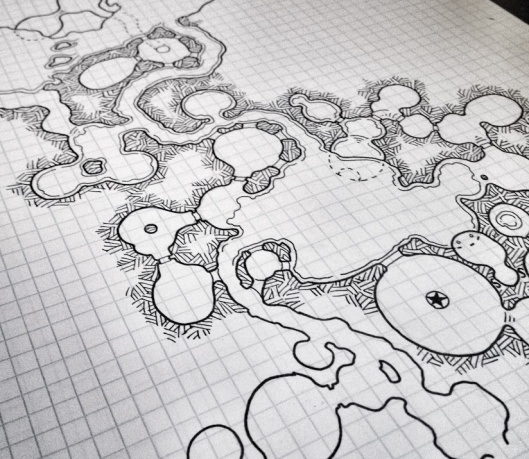 As I drew this map, I was loving the feeling of being free of both the 20-foot grid of the mines and even more importantly the strictly square and grid-conforming architecture of the dwarven city I drew before drawing the three sets of mines.

It has definitely become my second favourite map in the whole MegaDelve, just behind the Mushroom Cavern (which is definitely the high point of the set).

Home of the Muck Dwellers (no grid)

Persons riding the current of the Lost River not lucky enough to catch themselves in the slowing current at the Lost River node (or fished out by the otyughs there) or able to grab a bridge or abutment passing through the Flooded Mines will find themselves caught by the nets placed by the fishfolk between “the teeth” – where the Lost River is compressed into the narrower section and two mighty pillars of natural stone jut up out of the water. They maintain a set of nets that hang in the water behind the teeth to trap whatever makes it downriver.

Around the teeth and after them the Lost river becomes a white-water torrent crashing through the caves beyond, drowning out sounds and likely anyone foolish enough to try to brave the current.

1 thought on “[MegaDelve] Home of the Muck Dwellers”