Buried in the crypts and tombs under the ruins of Bryn Mynnyd is the Church of Silence (known be the few outsiders who know it exists as the Death Cult of Bryn Mynnyd or the Assassin’s Cult of Bryn Mynnyd). This group isn’t a “Mwah ha ha ha, look at my undead minions!” type cult, but are more the “heh heh heh… Murder, murder and murder, my pretties” type of cult.

Ensconced in a massive tomb in the crypts, the assassin-priests of the cult have trained most of the creatures that live down here to keep their distance from them, using alchemically-treated blue torches to remind them to stay clear. Priests of blood and murder, they prefer their corpses on the truly dead side and do not surround themselves with zombies and other undead as many necromantic cults do… but that doesn’t mean they don’t have the means to raise the dead when the shit hits the fan. 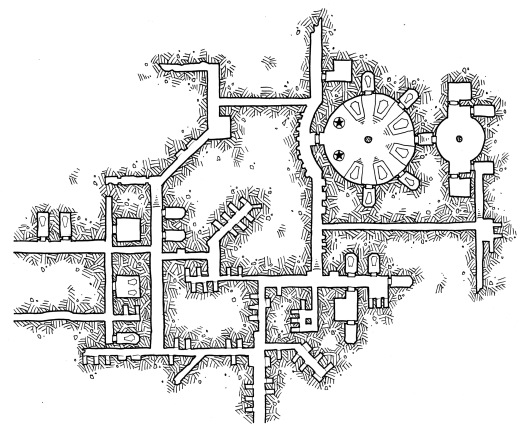 In fact, should someone make a concerted effort to eliminate the church, odds are they would find themselves surrounded by hundreds of skeletons and zombies crawling out of the many niches in this node. Both the high priest and his right hand man know how to use the dark heart in their temple to unleash a wave of animating force through the complex to awaken the many corpses they have prepared over the decades.

This map is provided for your personal use by the many awesome patrons who support this website through my Patreon Campaign. In fact, support has been so awesome that we’ll be taking a break from the Mega Delve for a week (or maybe two) in order to post some maps that are being released under a full free commercial license starting on Tuesday. We’ll have more information on how many maps will be released under this license once March begins and we can see the totals for March funding. Once these commercial maps are all posted, we’ll get back to the Mega Delve and post the last two remaining maps (the Necropolis under ruined Bryn Mynnyd and the Harpy Tower)!