And we are back to the Dyson Mega Delve for those two last maps to complete “The Upper Levels”. This is map number 30 of 31 in the set, and once the last one goes up I’ll put together a page here on the blog that links to all of the maps as well as the node map to make it easier to navigate the whole thing. 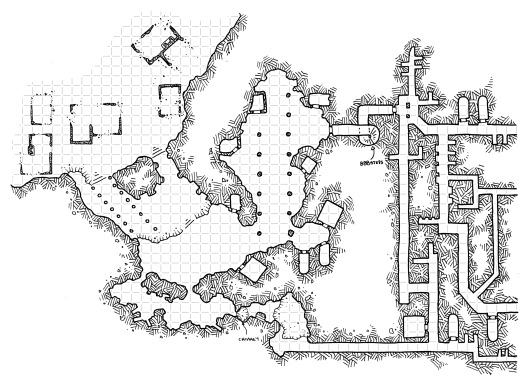 The Necropolis of Bryn Mynnyd (with grid)

The ruins of Bryn Mynnyd date back untold ages, and the city has been looted repeatedly by adventurers of all stripes. In the end, all that’s left is a few farmers who have moved back into the ruins to eke out a living away from the nearby town and the Death Cult of Bryn Mynnyd who travel through the ruins to get to their temple deep under here.

Bryn Mynnyd once dug deep mines to gather True Iron from veins that probably merge further underground with the veins that were later excavated by the dwarves in the abandoned dwarven city. These mines are far below the ruins of the city, and were given up to crypts long ago. They are accessed through a cave turned necropolis at the southern end of the ruined city, where a series of 888 stairs lead down to the old crypts and mines.

The Necropolis of Bryn Mynnyd (no grid)

Alternately, when goods need to be transported up or down the stairs, a massive natural chimney also links the two areas and a block and tackle is occasionally hooked up to the top of the chimney in order to move larger and heavier loads up and down from the ruins to the crypts below.

These bi-weekly map posts are brought to you by the many awesome patrons like Aaron Roudabush, Acritarche, Akerraren Adarrak, and Andreas Walters who keep the site and maps coming thanks to their pledges to the Dodecahedron Patreon Campaign. If you like these maps and would like to see more of them and have the money to spare, please check out the campaign that keeps these free maps flowing to everyone.