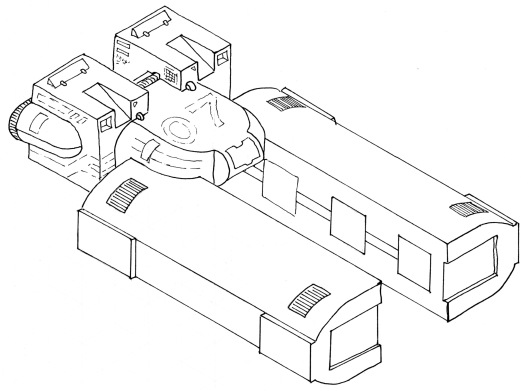 Sometimes I ask my patrons what they want me to draw. Fred Hicks asked (ages ago) for something modern or sci-fi. So I’m finally giving you something. My drawing style doesn’t lend itself well to most sci-fi stuff, so this was a lot of experimenting.

But here’s the deck plans for the Space Tug UPF Terence Trent D’Arby. The image above shows it pushing a pair of interstellar intermodal containers, which is about the lightest load you will find a tug shoving around. More often these tugs will be attached to a rack of a dozen or more containers, or linked up to a heavier ship or a derelict to give it a nudge.