This post is one of a series presenting the hexmaps of Baraloba and the areas around it. You can see the rest of the set here: [Baraloba and Environs].

Today’s six mile hex connects to Tuesday’s map of Baraloba – sitting to the northwest of the Baraloba map. Again drawn as an “experiment” using the Squarehex big hex mapping paper. 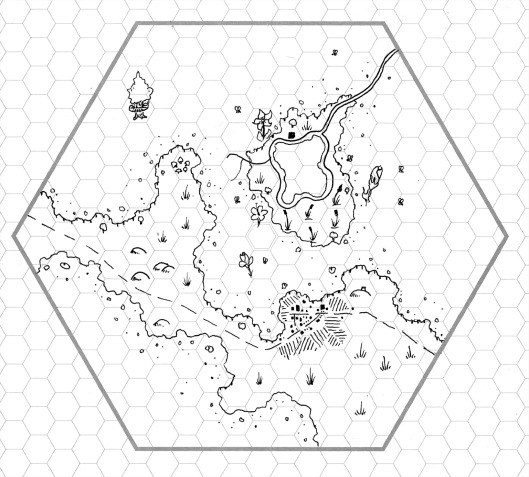 On a standard hex this would just be a forest hex, maybe with the road showing through it, but almost certainly not showing the smaller village here.

The village in question is Meadgrove – known for it’s apiaries and honey mead. Which should come as little surprise as the forest here is seemingly overflowing with flowers, most significantly larger than normal. As one adventures deeper into the forest the flowers continue to get bigger until sixty foot rose bushes and 80 foot lilies become the norm in what resembles a giant’s overgrown flower garden.

Northeast of Meadgrove is a small watchtower on a lone hill. Originally this was the site where Meadgrove was expected to be built, but the farmland that was cleared from the as forestry continued into the honeyed forest proved to be excellent and the village ended up growing where the forest once stood.

On the upper left of the map is an experiment in drawing an “elven treehouse” that didn’t really work out. Which is fine with me since I don’t like my elves living in trees anyways. So this phanaton fortress sits quietly in the honeyed forest, with some of the braver phanatons having learned how to train giant bees to be used as occasional mounts to oversee the area.