Sir James sought out an underground military headquarters from which he could command troops and maintain an eye on logistics but also be out of sight when needed. In the end he commissioned a pair of underground headquarters, neither of which was really completed before his death. 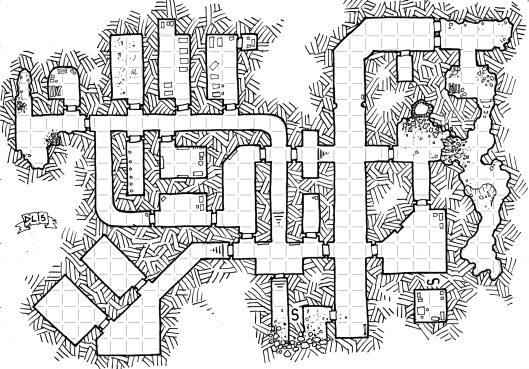 This particular structure was not only incomplete, but Sir James never used it as its designer intended, instead using it as a decoy base. Construction was never completed and the front entrance to the structure (at the lower middle of the page) was collapsed to prevent it falling into enemy hands.

To enter the structure now, one has to come in through the ceiling of a chamber that was undermined during construction and subsequently collapsed (drawn as the hole in the upper-right quadrant of the map). The hole is a fairly recent entryway, and little of the underlying structure has been looted or explored.

The structure was evidently meant to be significantly larger when completed, but the vagaries of war and the the role it got pushed into as a decoy kept it from being properly expanded before it was buried.

(And of course, I would love to see what you use it in!)