In late September, Billy Longino asked for some mapping ideas over on google+, so I threw him a title I was working on at the time – Rhinoceros Containment Caves of the Iron Overlord. He thought it was me trying to throw him off his game, but he worked through it and produced a really cool little map.

But it wasn’t really a joke, as I was in the middle of my own version of said map and was curious how he would interpret the name compared to my version (because his mapping style is quite similar to mine and I really do like it). 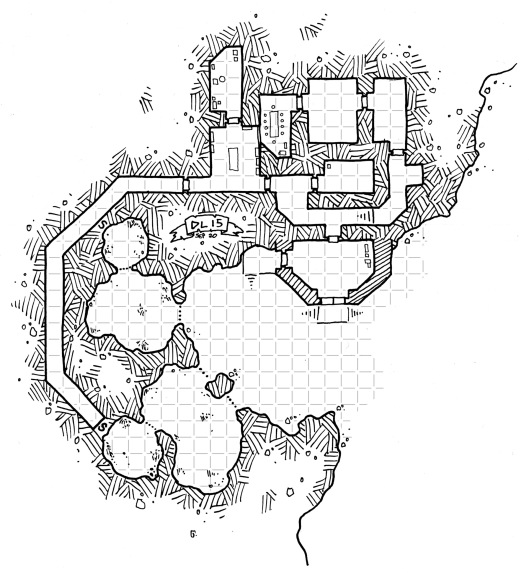 The Iron Overlord (a sorcerer of some power who is never seen outside of his full plate armour) maintains this hillside structure where the rhinoceroses are experimented upon with the goal of producing a breed of brutal war rhinos. Most of the time the place is fairly quiet, observing the four rhinos in their two enclosures. But sometimes the rhinos are magically tranquilized and carried up the sloping corridor to the lab. The room adjoining the lab to the east is also twelve feet above the lab, allowing the Iron Overlord and any guests to oversee the work being done to the rhinos without getting their hands bloody.

Rhinoceros Containment Caves of the Iron Overlord (no grid)

The whole facility lies just outside of whatever city the Iron Overlord is based out of. Most of those who work here live on the outskirts of town and walk here to work (cleaning and feeding staff) while the surgeon who does the major work lives in the offices behind the viewing room.