One of the quickest and easiest ways to indicate weirdness to players is to have something quietly and simply defying gravity. In the case of the Shattered Tower it may not even be immediately apparent… until you look up and see the break in the incredibly tall tower almost 180 feet above ground and that the upper reaches of the tower are only connected to the lower areas by a simple ladder. 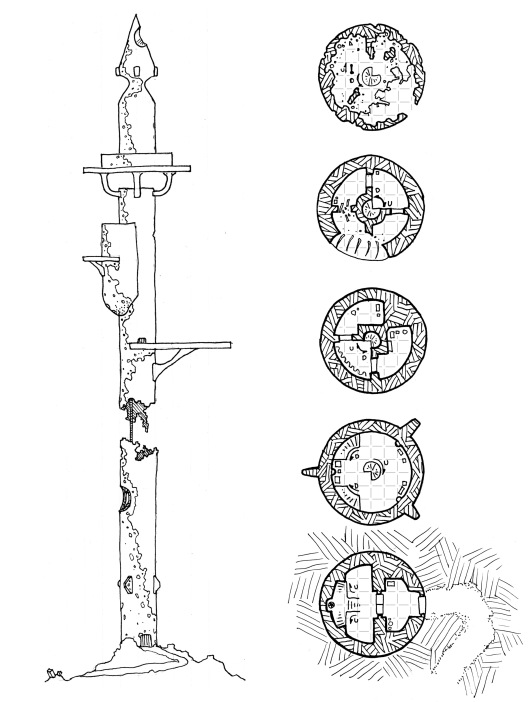 The Shattered Tower – Lower (with grid)

The tower itself dates back to elven rule or possibly earlier and thrusts up silently from the rough mountainous terrain of the Amaranthine Wastes, casting its shadow like a sundial across the Violaceous Cut where the Ironflow river crosses into the wastes.

The entrance to the tower is a massive door of an unknown variety of stone likely imported to this world from across the dimensional boundaries, kept wizard locked through the ages. Those wishing to enter and explore the spire are best to bring at least one means of knocking aside the sealing enchantments that still work to keep the tower safe from interlopers.

The Shattered Tower – Lower (no grid)

It’s only in the last year that the ladder between the lower and upper parts of the shattered tower has shown up. It has been mentioned by travellers in the past, but it is likely that whoever had erected the ladder also pulled it up to the upper portion of the tower when it wasn’t in use. But for the last eight months the ladder has been visible from the Violaceous Cut to those with spyglasses and magically enhanced vision that can see across the distances involved. Perhaps those who put it there have suffered some foul fate? Or do they no longer require secrecy in their endeavours? Or have they just left the tower completely, leaving their ladder behind?

This map is made available to you under a free license for personal or commercial use under the “RELEASE THE KRAKEN” initiative thanks to the awesome supporters of my Patreon Campaign. Over 300 awesome patrons have come together to fund the site and these maps, making them free for your use.