The very beginnings of an underground citadel that never was, Warrek’s Nest expanded on an existing cave and was meant to become a massive multi-leveled underground structure. The location was chosen because of the presence of water, easy access to farmland, and limestone which was easy to dig through. However, no one expected the limestone to be home to rock worms, and the water to have small subterranean access to a nest of obscene eyes.

Construction soon came to a stop, and Lord Warrek the Strong ended up hidden in the finished structures with his loyal retainers – besieged by stone worms, harried by obscene eyes, and completely insane with claustrophobia.

Today the nest is quieter – home to a sorcerer who has magically harnessed the rock worms and is using them to restart construction in the great hall and who has killed all but one of the obscene eyes in the waters. The sorcerer and his flunkies generally keep the the southern portion of the nest. The corridor to the water has two locked rooms that are home to any prisoners the sorcerer currently has. 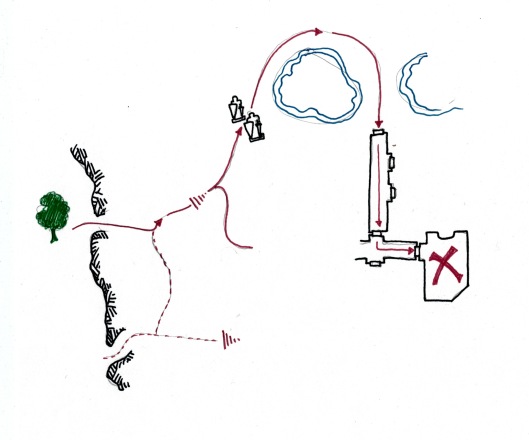 What I definitely don’t draw enough of for the blog, even though they turn up with some frequency in my games, are treasure maps. So here’s a treasure map that leads to the treasure room of the dungeon while avoiding the parts where the sorcerer and his flunkies live.