Having entered the city via the great tree instead of one of the two cave routes, the party found itself without an easy exit strategy when the local tasloi population burned down their access point. Last night they chose the “forgotten cave” and used that route to escape… they figured out the puzzles and entered every guarded area from “the back” since the guards are posted to prevent intruders, not stop them from escaping. A team of 18 tasloi pretended they didn’t see the walking massacre go through their guard post (after they killed the Yuan-ti leader by surprise in one round), and the bugbears literally lay on the floor protecting their heads screaming “Why are you doing this?! Oh dark lord, please stop!”

It was a good evening of slaughter and puzzle solving.

Part of last night’s game was introducing two new characters (our 5e and DCC groups went through a major player transition over the holidays) so I pulled out the “Totally Not a D&D Fiasco” playsheet I had created a couple of years ago and changed it around. The original version was for generating a new party in a campaign set in my setting’s east coast near Atharva’s Point. Since this is a higher level game now (everyone hit level 7 last night) and is much more travel oriented, I rewrote the page of locations from the original set to include locations from previous sessions and major cities around the region. 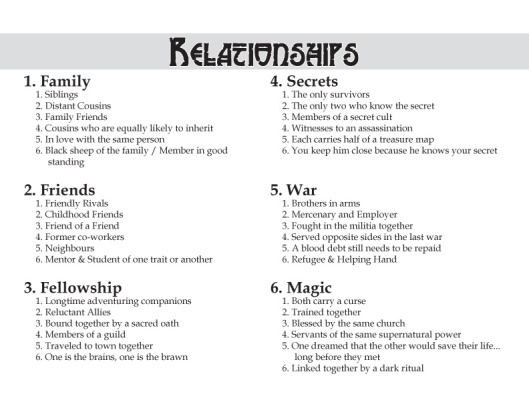 Totally Not a D&D Fiasco Revised

Unfortunately one of the new players couldn’t make it at the last minute, so I ended up sitting in for him in this part (hopefully he’s cool with the results!).

For those unfamiliar with the Fiasco RPG, each player takes a turn picking one die from the dice that have been rolled and putting it somewhere to define someone’s relationship or something attached to that relationship. Once the category has been set (for instance, the first relationship was defined as being “Friends” by picking one of the dice that had rolled a 2 and putting that between two of the players), then later choices can refine that category (in this case a little later I chose the only remaining 4 in the pile of dice and used it to define the friendship as being between two former co-workers).

In the end, each player has a relationship with the player on each side of them (in this case we didn’t do this for two of the players, as they had pre-existing relationships), and each relationship has an attached Goal / Need or Person / Place (but never both).

You can download this new version of my Totally Not A D&D Fiasco PDF here.