So, I posted a map I drew back a while ago that was the middle finger. It looked like this:

The Dungeon of Fuck You, That’s Why

Well, the joke wouldn’t die and now I’m writing up a full adventure called… well… The Dungeon of Fuck You, That’s Why. So I saved up all the maps for the module and posted them all at once, today. Mostly because I would be embarrassed to post any one of these on its own as a map of the day.

So, starting with the entrance level:

Right off the bat we enter the dungeon via bathroom humour. This is not going to be a highbrow adventure when it is done. Also, odds are that no one will figure it out if you describe it as they travel (the cave bends a bit to the left, and continues to be very uneven… then it twists to the right…

And with most mappers, they probably won’t clue into the text of this level either. For bonus points, check out what I used instead of cross-hatching for this map. It was… a lot of work. I won’t ever use words as background fill again. 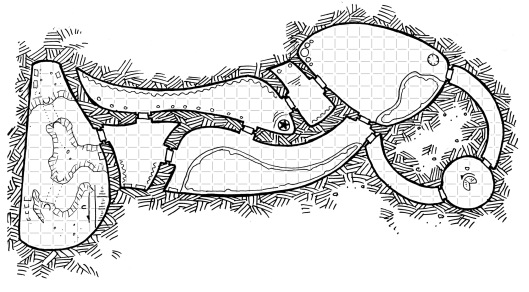 By level 3 there’s a better chance that they’ll have figured out that they are in a “joke” dungeon. But by then half the party should be dead or worse. And it’s only a quick run down that last stairwell to the final level of the dungeon…

The Level of Fuck You, That’s Why!

So there we go, all four levels of this uber-adventure. Soon to be showing up here on the blog and for sale in print and PDF.

9 thoughts on “The Dungeon of FU, full level set.”