Most borders remain generally undefended, with the occasional watch tower near primary points of interest. But there are always places where it just makes sense to set up a small fortification along major trade routes and roads leading in and out of your domain.

South of The Citadel at Sabre Lake is just such a place. A small escarpment along the main road used by merchants, farmers and the occasional military force provides a decent view of the area while also being able to interdict travel along the road, forcing those who wish to avoid the fortress into long detours through unfavourable terrain. 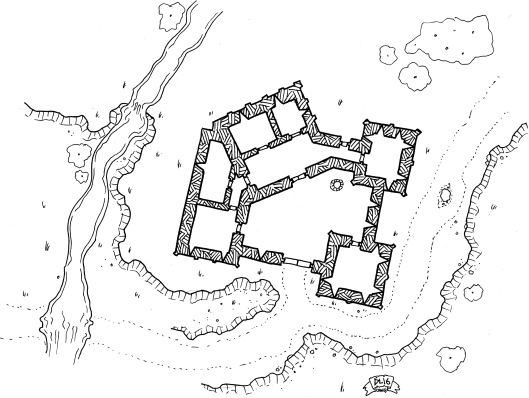 The main gate of the fortification leads into a small courtyard with a well where a few horses are normally kept for patrols and messengers. The two towers on the right side extend a level (15 feet) above the walls of the fortress, as does the tower built into the lower left side of the main structure.

A well defended postern gate leads into the north wall of the fortification and from there into both the main structure and the smallest tower.

3 thoughts on “The Roadside Fortress”