The Lost Ossuary (with grid)

This complicated little map started with a simple request from Christian Klauser over on Patreon.

The Lost Ossuary is a small dimensional rift beneath the Lobachevsky Church. Cut out of the stone beneath the church as a set of crypts and ossuaries, the Lost Ossuary displays bizarre geometries to those who would try to map it out. Routings through the Ossuary make little sense, with paths connecting with far less than 360 degrees of angle between them, and some secret passages connecting areas that should be hundreds of feet apart.

To confuse matters more, the ossuary has two types of construction – rough hewn crypts and the carefully built ossuaries and tombs. Both areas are completely contiguous, and yet seem to cut each other up at times. In all, the structure is a nightmare for any who would try to map it out.

This is of course because the planar topology of the Ossuary is a cube – however this is never apparent to those within it – the faces do not involve any changes in angles – the floors remain consistent and flat instead of switching by 90 degrees as one walks over the “angle” in the cube.

Exploring the cube will probably result in some weird maps… here’s a very simple map of just part of the crypts themselves that ends in the same room in two different locations, reached through two different doors.

In time, any attempt to map the Ossuary from the inside will result in a map that crosses over itself and comes back from point A to point A with those two locations at wildly different parts of the map.

The Lost Ossuary works not only for classic fantasy gaming, but would be a perfect spot for a bit of adventure in a Call of Cthulhu campaign (non-Euclidean geometry), or for other games that deal in strange places and possible hyper-tech (Numenera, The Strange, or something happening just inside a rift in Rifts).

Once the adventure is over, however, it might be fun to show the party exactly what was causing all the chaos.

Here I’ve taken the map and made it into an actual cube to show how the halls and chambers connect.

I printed it on some fairly heavy paper stock (it would be significantly easier to assemble using cardstock, mind you) and trimmed it so that there were tabs that I could use to assemble it. A bit of glue or tape and it goes from 2 dimensional to 3. 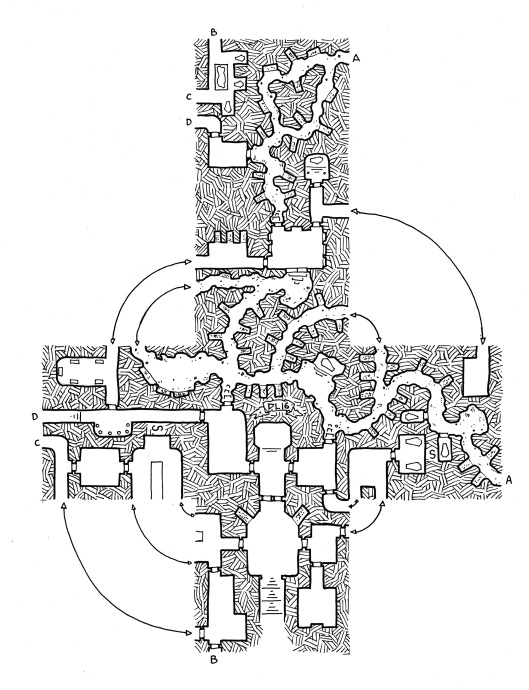 As with all the maps on the Dodecahedron, this map is made possible by the amazing people who support the continued production of this fanciful cartography through my Patreon Campaign. Check it out to see how you can help keep the flow of cool maps coming for as little as 5 cents a map.

26 thoughts on “The Lost Ossuary”