Temple of the 4 Gods (ground level)

A massive and mostly open stone structure, this temple is dedicated to the four creative forces of the universe and the personas that embody them in this world. The temple itself is nearly symmetrical, but each of the four quadrants has been modified and built up in it’s own ways to make them feel unique to the aspect in question.

Originally a request from last year on my Patreon page, I’ve had this request sitting on a post-it note beside my monitor since June and finally put it together this month. Below is a side-view cutaway of the temple (not a true side view, as the temple is basically solid appearing from the side because of the odd asymmetric construction).

Each quadrant of the temple is dedicated to one aspect of the four creative forces – and while the priesthood is united in the worship of the pantheon and creation as a whole, many of the monks are more… dedicated in their service to one of the sub-aspects presented in the four statues at the centre of the temple. Each aspect has its own rituals, colours, and so on.

The four aspects of creation celebrated by the temple are the aspects of Imagination (represented by the colour yellow), Life (green), Craft (red) and the balance of Law and Chaos (grey).

Temple of the 4 Gods (Rooftop)

Secreted among the pillars and walls of the main level of the temple are a pair of secret doors leading to stairs to the upper level where the senior priesthood meet every three days in contemplation of the aspects (and to take care of temple business, repairs, construction, consumables, etc).

The temple could also be repurposed in a campaign for a more eastern version of the Temple of Elemental Evil (or an outpost of the same in a more eastern campaign setting). 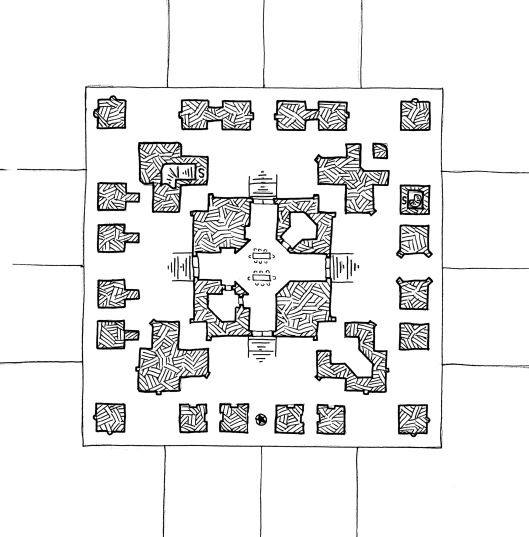 And, if you like maps like the Temple of the Four Gods and the other free maps offered here, please check out my Patreon Campaign where you can help to keep these maps coming!

1 thought on “Temple of the Four Gods”