As our second month at the “Release the Kraken” level of funding, a vote was taken by the many patrons of the Dodecahedron Patreon Campaign to decide what map from the blog’s extensive back-catalog would be released under the site’s free commercial license this month. Just edging out Axebridge over Blackbay was a true classic map from the history of the blog, The Roots of the World (which was posted almost exactly 5 years ago and drawn a year or two before that).

Since this map was drawn in pencil, I had to take a bit of extra work to get it up to the level that I am comfortable releasing commercial projects at. So instead of just opening up the classic scan of the map, I took the time to clean up and fix up that old scan and thus to give you these new versions of the map to work from.

Roots of the World

The Roots of the World were where the party had to collect a water-based artifact (they got the fire artifact in Ember Crag and then proceeded to get an earth artifact elsewhere). The majority of the structure is flooded knee-deep in water (with the massive central area having much deeper sections), and the central chamber is a massive cavern with regularly spaced stone columns.

The name of the site is not mere allegory however – these columns are indeed the “Roots of the World” and any attack that strikes them makes the whole place shake and rumble (everyone in the dungeon makes a save versus Petrification / Paralysis (or a Dex or Reflex save) or they cannot move for one round  those making the save still treat the dungeon as difficult terrain for the round).

The Roots are home to a lot of Toads (see the racial class I posted way back in 2010), along with some massive toad ogres (using Ogre stats, except they can make a special attack once every six rounds that stuns everyone within 120 feet who fails a save versus paralysis – this is usually a massive bellow, but could also be slamming the ground with their massive clubs or something similar). The southern section (the old fort on the southern plateau) is currently home to a small team of hostile gnomish explorers who got here before the party but who are finding the guardians of the main areas to be too hostile to deal with. 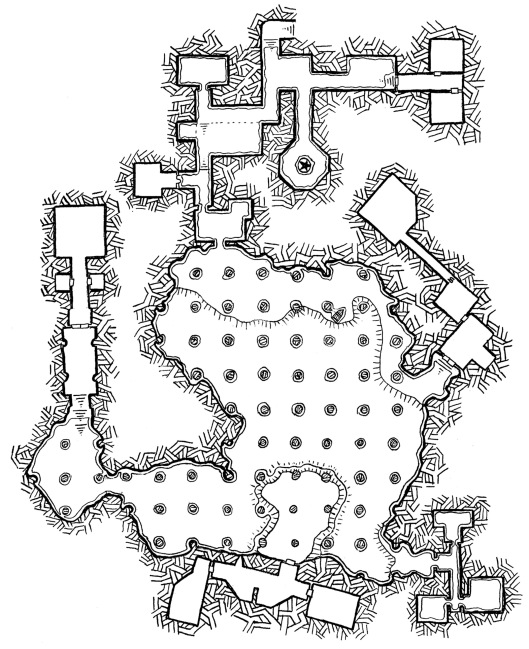 Roots of the World (no grid)

When I ran this, that’s basically all the notes I had, the rest I made up as I went along. So I recommend you do the same. Alternately, you could actually take the time to stock the Roots of the World and I’ll post your version (or link to it if you post it to your own blog).

Parts of this map made a return visit to another campaign I ran a few years later, where a race of giant dwarves were protecting (and destroying) the roots of the earth.

1 thought on “Return to the flooded Roots of the World”