I occasionally draw maps of structures that are small enough that I feel awkward posting them as maps to the blog (mainly because I don’t want to feel like I’m short changing my patrons). So here are TWO small maps that I’ve drawn recently that are ready for your game. 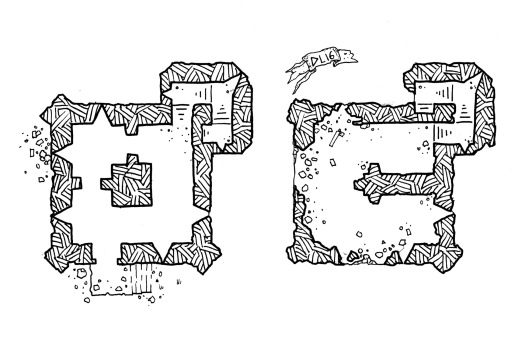 The watch tower hasn’t been maintained since it fell in a border skirmish a generation past. Except for the missing door and the debris fallen in from the stairwell, the ground floor is in excellent shape. The second floor not so much – part of the stairwell wall has fallen down, and most of the second floor’s walls are collapsing and there is no longer any sign of the old wooden roof structure that blew free in a storm twenty years ago.

It wouldn’t take a lot of work to fix it up to be usable – just sealing off the stairwell and putting a door on the structure would be enough in the short term, and then reworking the upstairs when time permits. 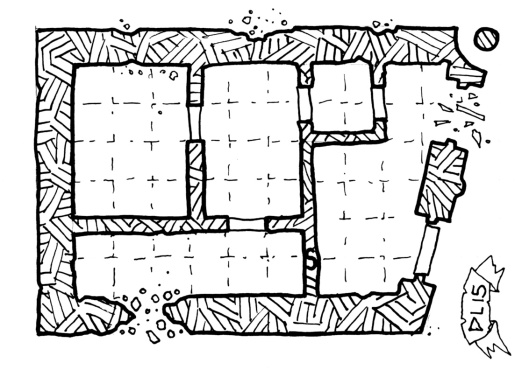 This second map is a small ruined structure I drew during a DCC session early last year on a Pad Of Geomorphic Intent.

Probably a small temple or shrine, the place has been slowly falling apart due to aggressive neglect. One door is missing and one wall in the back of the structure has slid off the foundations and left a large breach allowing the elements to sweep into the room every winter.

The first of these two maps (the tower) was also used in the recently released Adventure Most Fowl – a low level OSR adventure from Grey Fey available on RPGnow.

1 thought on “Some little structure maps”