Last week I posted the first map [link] of a massive undercity project I am taking on. The goal is to produce a large set of maps that interconnect to produce something akin to, but very much different in style from, the original Jakallan Underworld map that M.A.R. Barker used in his Empire of the Petal Throne games.

While the first map in the”My Private Jakalla” set was primarily influenced by the classic Jakallan Underworld map combined with my own personal idioms and stylings, this second map is more firmly rooted in the “feel” I got from some of the underworlds we’ve explored in James Maliszewski’s EPT game combined with the design concepts of some sewer maps I drew for Alexander Macris.

My Private Jakalla – Map 1B

With the additional sewer structures, I aim to also make this map link up with the much older sewer map I posted to the blog – the Sewers of Travon [link]. (Seriously, I posted that seven years ago? This blog keeps getting older and older on me… Maybe I’ll even redraw the original map…)

To see where this map links up with the previous map in the “My Private Jakalla” project, I’ve put together a little index card that I’ll update as I add new maps to the set. 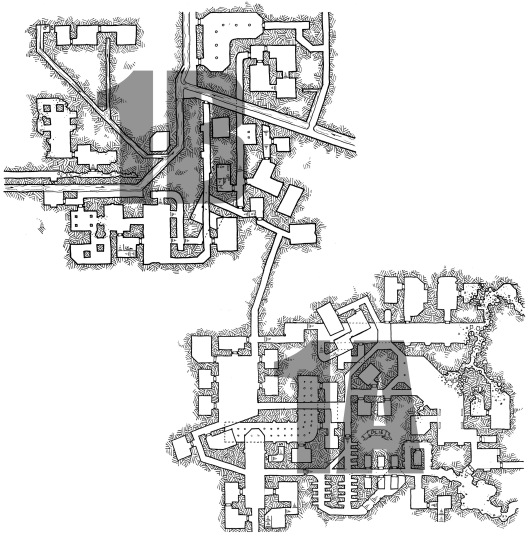 This area of the underworld contains the aforementioned sewers as well as the basements of several buildings that have been repurposed along the way. Two surface access points are included on this map, both towards the left hand side.

The upper entrance is a ladder that leads into a small section of the sewers and to a set of secret chambers – remaining fairly isolated from the rest of the underworld unless one should trudge down along the very narrow and low-ceilinged sewer ways to the larger sewers.

The entrance on the bottom side of the map leads into a series of old basements that have been refitted as a sort of “underground shopping plaza” with holes cut into the walls between the structures on the left and a larger chamber on the right used for larger auctions of goods.

My Private Jakalla – Map 1B (no grid)