Last weekend was spent in the glorious herding of cats in my 5e campaign.

This campaign was launched as a playtest of the new rules set before I run a “real” 5e campaign. As such I’m now aiming for the campaign ending and am willing to do a bit of railroading to get there.

ALL SIGNS POINT TO THE TEMPLE OF IRON has been the slogan of the campaign for pretty much all of 2016. Yet the party has only spent two sessions in the actual temple of iron and insist on exploring every little red herring I let get in their way.

But at the end of tonight’s game, they found their way back (via three other adventure hooks that lead on different missions that all end up aiming … to the Temple of Iron / The Iron Temple) to the front door of the Temple of Iron, hidden in a old unused mountain pass in the Barrier Peaks.

An “Expedition to the Barrier Peaks” if you will.

It turns out that the reason the raiding parties from the Forbidden City have been so ferocious and shutting down all caravan traffic between WinterSpire and Yoon-Suin is population pressure from the north where strange monsters have been wandering out of the Iron Temple and chasing the natives down to the Forbidden City which is now overcrowded.

Thus the party’s adventures in mercantile skulduggery lead to the Iron Temple.

Further, they’ve been finding hints and clues of a great paladin who went missing along with an epic artifact weapon… in the Iron Temple.

Their adventures in Yoon Suin also sent them eventually… to the Iron Temple.

The Lord’s Alliance wants all these monsters (coming from the Iron Temple) stopped.

My sheet of character names
(3 columns, names collected from various fantasy name generators, with notes added during play as to who each name is linked to. This is probably one of the most important tools for running a game with extra verisimilitude – players feel that every character is important when they each have a unique name).

Module I1 – Dwellers of the Forbidden City
(the third “module” I used in this campaign, after going through Lost Mine of Phandelver and then +Chris Kutalik’s Slumbering Ursine Dunes) (sporting fancy aftermarket googly eye modifications)

Module S3 – Expedition to the Barrier Peaks
(the actual “Temple of Iron / Iron Temple” and the almost climax of the campaign – I expect the campaign will end shortly after they finish this, or MAYBE one session later) (ALSO sporting fancy aftermarket googly eye modifications)

Campaign Map
(map I drew of the current campaign region. I’m planning on redrawing it larger, adding in all the locations where interesting stuff happened during the campaign, and printing out posters for all the players in the campaign as a keepsake for trying out 5e with me)

Level 1 of the Temple of Iron
(I redrew all the maps from Expedition to the Barrier Peaks to reduce the number of empty rooms through the place – seriously… there are HUNDREDS of empty rooms in this module as written – this is the extent of the party’s explorations of the temple so far. I honestly expected I would be posting my redrawn maps in June once the party was done with the adventure… but the party hasn’t gone past the first level yet.) 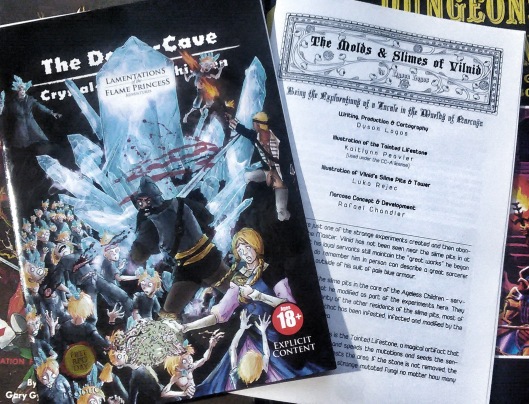 So far in our campaign I’ve run or at least partially run the following adventures – converting them (mostly on the fly) to the 5e rules set: