Vardisstvy is a small village and great house built up in what used to be the northern gnoll wastes. With the rapid decline of the winter gnoll tribes, the region has become a place where those seeking land and freedoms unavailable in the Satrapy have started setting up homes and villages.

Vardisstvy was one of the first such places and shows its roots as a frontier castle built when gnoll raiders were much more common and came in larger groups. In the original configuration of the town, the town’s walls did not connect directly to the great house’s, and the river that had been redirected as a moat surrounded the walls. The later replacement of the bridges into town with built up earthen berms cut off the southern portion (where the river didn’t flow but just collected into a marshy mess anyways) and in the fifteen years since the old moat land is slowly being converted into fields and tuber gardens.

Vardisstvy sports a number of larger structures that make it central to local governance and a stopping point for farmers and merchants in the region – a full church, a guildhall belonging to the mercantile and weaver’s guilds (who also rent out space to other travelling guildmasters and journeymen), a two-story inn, and a commoner’s courthouse separate from the great house on the hill.

The great house is a three-story stone structure with a four-story tower attached. From the structure the local lord looks down on the village and much of the local region.

Of interest to some is the presence of a graveyard within the walls of the village, attached to the church. The local religion believes that being buried outside of the walls of civilization means that the dead will be eternally uncomfortable and sometimes even lost in their afterlives – thus the richest and most well-to-do families manage to get their deceased buried in the small church yard, while farmers and peasants are buried on a nearby hilltop. 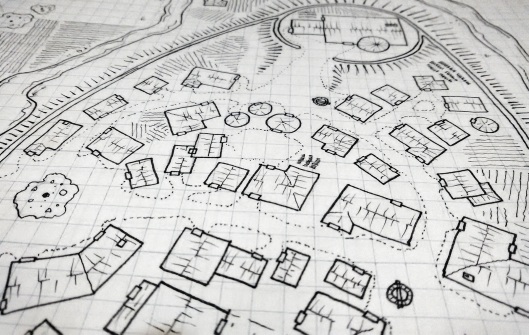 Last month I posted the small traditional motte & bailey castle of Hrangveld but was unhappy with the way I handled the hill notations. So I thought I would try another similar structure with different notation. This time I went with a larger village and signs that the entire settlement had been present significantly longer (the filled in moat to the south and a tree inside the walls). The overall technique makes me happier than the last one, but the lines for hills take a very long time to draw out.

8 thoughts on “Vardisstvy – a Motte & Bailey Castle and Village”