Named for the heavy clay found in the mudflats where the town was established, Clayfield Village is a small outpost of humans and halflings built around a bridge across the outlet of the sluggish Laglach river. 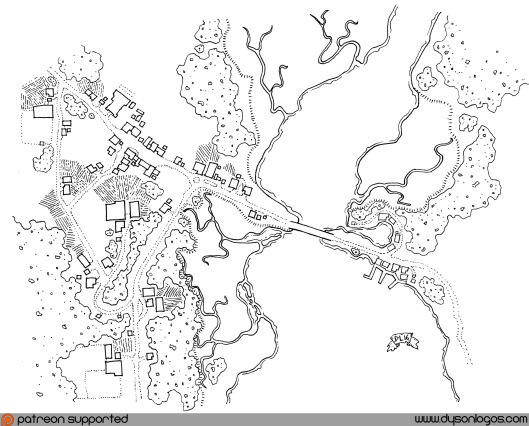 While the local halflings still use the old name for the original halfling farm along this area, Laglin, when talking about the village, almost everyone else calls it Clayfield (unless they are trying to get in with the more conservative halflings). The yellowish grey clay deposited here by the Laglach is harvested by the locals to manufacture bricks as well as pottery. Lagle Ceramic (as the clay is known when fired and finished) is used for most flasks and household ceramic uses in the region although it is not particularly strong (making it sought after by some who seek easy-to-break containers for alchemist’s fire and similar substances).

Clayfield Village was originally inspired by a request from Mark Clover of Creative Mountain Games. I occasionally ask for requests from my patrons at the $2.50 level and above and try to draw as many of them as I can. The village was drawn entirely in freehand using Sakura Microns on regular printer paper (taken out of my printer for the job… which was a pain in the ass when I wanted to print a character sheet the next day and was out of paper).