The eight-pointed star has been the symbol of chaos for so long… that in some ironic way it has become the law. And yet chaos champions and sorcerers still build with that symbology in mind, sometimes crafting massive arcane structures that tell all who see them that they are massive, immutable structure dedicated to change and mutability.

No one ever said chaos sorcerers were clever. But it could just be that they have a strong sense of irony.

To add confusion to the issue, the temple may be called “the octagonal temple” but it is eight-pointed, not eight-sided. Chalk it up to self-aware chaos sorcerers again.

And when you can see basically see a chaos symbol from orbit, it doesn’t take too long before some warriors and nobles collect a motley crew of “adventurers” and holy warriors to destroy it. Which appears to be the case with the octagonal temple – where one side has been smashed and is collapsing into a muddy morass of swamp water while the rest of the surface structure remains quiet and seemingly abandoned.

There are four gradual sets of stairs up onto the temple platform 20 feet above the marshy ground of the area, and four more (much steeper) stairs leading back down towards the three remaining portals to the understructures of the temple. Two are trap doors (padlocked and rusted shut) which lead to ladders, and the last is concealed in magical mists and links to an elevator platform that is controlled from the area beneath. 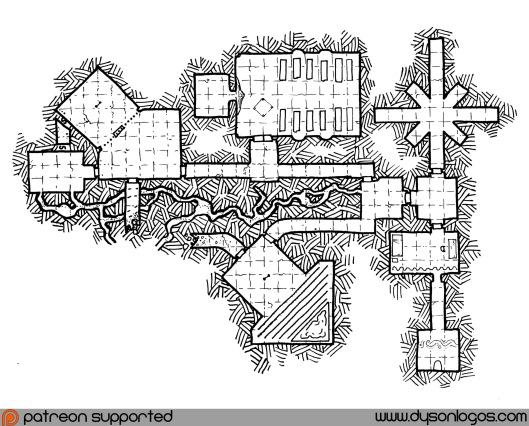 The understructures of the temple are a little less organized. Ladders in the camber to the upper left and in the stepped chamber with the triangular pool lead up to the rusty trap doors (the upper left on appearing to be a prison of some kind, thus also explaining the padlock). Several passages (and also two of the newer rat holes) once lead to the the collapsed area where the ruined section of the temple rests.

4 thoughts on “The Octagonal Temple”